More than 100 Irish troops return from Lebanon after coronavirus delay 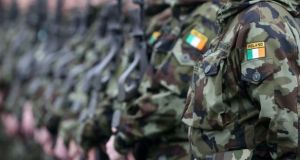 Some 115 Irish troops serving in Lebanon returned to Ireland on Monday morning, after their planned rotation home had been delayed by several weeks due to the coronavirus pandemic.

The Defence Forces personnel were the first of two groups or “chalks” returning home on rotation, with a second group of 170 troops to return on July 2nd.

The troops were originally due home in the middle of May but that was delayed when UN secretary general Antonio Guterres banned rotations of all UN peacekeepers until June 30th, to prevent the spread of the illness, also known as Covid-19.

The Government had attempted to secure an exemption for the Irish troops on the Unifil mission in Lebanon from UN headquarters in New York.

The Irish troops had been stationed in the middle eastern country for more than six months, and will now be required to quarantine for 14 days under public health guidelines.

The first chalk of troops rotated in to replace the returning personnel left Ireland at the weekend, having been self-isolating for two weeks in Coolmoney camp in Co Wicklow. The second chalk to be deployed to Lebanon will depart before July 2nd.

In April Irish special forces troops were rotated home from Mali on time, despite the UN’s request for a delay. Fourteen Army Ranger Wing personnel were flown home with the help of the German air force, while the Spanish air force assisted another seven Irish troops return from a separate mission in Mali.

Taoiseach Leo Varadkar previously told the Dáil the moratorium on rotating troops was to prevent the spread of coronavirus “by limiting movement of personnel into mission areas”.

The Defence Forces has a long-established peacekeeping role in Lebanon as part of the UN mission, dating back more than 40 years.

The peacekeeping force had been established following the Israeli invasion of Lebanon in 1978, and some 47 Defence Forces personnel died in the service of peace over a 23-year period.