Coronavirus: Private hospitals takeover agreed without ‘luxury’ of due diligence 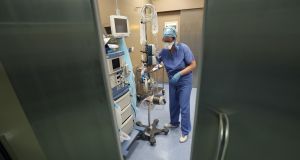 The HSE effectively took over the operation of nearly 20 private hospitals amid concerns the public system would be overwhelmed with Covid-19 patients. Photograph: Nick Bradshaw/The Irish Times

The €100 million a month deal that saw the State take over nearly 20 private hospitals during the Covid-19 pandemic was entered into without having “the luxury of time” needed to carry out regular due diligence, the HSE has said.

In an email to the Department of Health, HSE chief executive Paul Reid said he anticipated that implementing the arrangement, in line with policies set out by the Government, would have “unforeseen consequences”.

“I am keenly aware that this arrangement has been expedited by our respective teams to meet the urgent requirements for care, and that luxury of time that would normally be taken to undertake due diligence is not afforded to us in this instance,” Mr Reid told department secretary general Jim Breslin in April.

“There may be, and most likely will be, unforeseen consequences as a result of our implementing these policies , and I know you will support the HSE in dealing with such possible outcomes.”

At the end of March the HSE effectively took over the operation of nearly 20 private hospitals for an initial three-month period amid concerns that the public health system could be overwhelmed by large numbers of people falling seriously ill with Covid-19.

The agreement has since been criticised over its forecast cost of €340 million, the extent to which the private hospital beds have been used and the knock-on impact the deal had on private patients.

The Government decided last month not to trigger a two-month extension of the arrangement, and the State’s control of the private hospitals will come to an end early next week. The latest figures show no new Covid-19 deaths were reported on Sunday, and just six new cases of the disease were confirmed.

Documents published by the Department of Public Expenditure show that in deciding to end the private hospital arrangement the Cabinet went against the HSE board’s recommendation to retain the extra capacity.

The documents also show that the Government will have to decide by Friday if it will end a lease on the Citywest Hotel complex, which has capacity for some 1,700 beds and has been available for self-isolation and as a step-down facility for Covid-19 patients.

The lease is expected to cost more than €20 million, and questions have been raised about the amount the facility has been used given the costs involved.