Covid-19 survivor: ‘I couldn't believe I couldn't go to my husband's funeral’

Maura Byrne’s husband died of Covid-19 while she was recovering in hospital with the same disease. Video: Enda O'Dowd 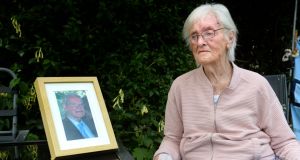 Maura Byrne had to watch from her carer’s mobile phone as a funeral service for her husband of almost 70 years took place.

“It knocked the bottom out of my world,” she says of not being able to attend.

Stephen Byrne (93) died of Covid-19 at St James’s Hospital in Dublin on April 19th. Mrs Byrne (94) was recovering from the disease at St Luke’s Hospital in Rathgar at the time.

“I couldn’t see much,” she says of watching the funeral, held at St Agnes’s Church in Crumlin, on the phone. “There was a young nurse, she was lovely, holding my hand, but I felt I should be with my people. I just didn’t understand it.”

Mrs Byrne entered St James’s Hospital with shingles on February 14th and was transferred to St Luke’s for respite two weeks later. She tested positive for Covid-19 on April 11th and returned to St James’s, where she remained until June 8th.

Mrs Byrne, originally from Ballsbridge, met her husband, a plumber at the Guinness brewery from Arbour Hill, at a Dublin cycling club and they married on September 5th, 1950. They bought the family home on Dowland Road in Walkinstown and had six children – Máire, Stephen, Bernadette, Deirdre, Paul and Dermot. There are now 17 grandchildren and 15 great grandchildren.

Mr Byrne suffered from dementia later in his life and was cared for by his wife until last year, when he moved to the Croft nursing home in Inchicore. He was brought into St James’s Hospital on April 16th after being diagnosed with Covid-19 and died there three days later.

“I’d ring every night and one of the girls would say he’s fine, as always. Then Máire rang me and said ‘Dad’s not well and he’s in James’s’,” Mrs Bryne recalls.

“I said ‘I’ll go over and see him’. She [Máire] said ‘Mam you can’t, you’re in lockdown you can’t go over to see him.’ So Deirdre and Bernadette were allowed to go in . . . He died the next morning.

“I couldn’t believe it, that I wouldn’t be allowed go [to the funeral]. I maintain I’ve had no closure. A funeral is a closure.

Mrs Byrne says not being able to go to the funeral was very difficult as all she wanted to do was “hold his hand”. The Byrnes plan to arrange a Mass later in the year to remember Stephen that can be attended by all his family and friends.

“He was the kindest and most loving man,” she says. “You always had that feeling that you could depend on him. He never ever let you down . . . Deirdre’s girls were asking me one day ‘how did you know he was the right person?’ I said ‘you just know’.”

As his dementia progressed, Mr Bryne would fail to remember or recognise relatives but Mrs Byrne says “now and again he would say ‘I like you, you’re a nice lady’”.

Since being released from hospital, Mrs Byrne has been cared for at home by Máire and is feeling better with each passing day.

“My health is wonderful. I’m doing a little bit more every day. I can now dress myself. I can put on my shoes, which I couldn’t do,” she says.

“At night I say ‘good night Stephen’ and I say a Hail Mary, because that’s the only prayer he knew,.I say ‘Good night, Stephen’ and then I go to sleep.”