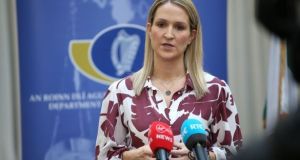 Minister for Justice Helen McEntee has defended the appointment of Séamus Woulfe to the Supreme Court, saying she adhered to “a very clear process” before bringing his name to cabinet earlier this month.

In her first public comments on the matter, Ms McEntee told the Oireachtas Justice Committee on Tuesday that she did not want “anybody to say that I’m refusing to answer questions” or to outline the process that led to Mr Justice Woulfe’s appointment.

The Government has resisted repeated attempts by the opposition to force a question and answer session with the Minister on Dáil time on the matter.

Ms McEntee said that when she was appointed as Minister, she looked at the recommendation that had been made by the Judicial Appointments Advisory Board (JAAB) which supported the former Attorney General’s application for the role, as well as other expressions of interest.

The Irish Times reported last Friday that at least three other judges expressed their interest in the role, but Green Party leader Eamon Ryan and Taoiseach Micheál Martin have said they were not told of this.

Mr Justice Woulfe was recommended by JAAB, but applications from sitting judges are not routed through the advisory body, and are instead sent to the sitting Attorney General, who passes them onto the Minister for Justice.

Ms McEntee said that following these considerations, “I spoke with the Taoiseach, the Tánaiste, Minister Ryan and the [Attorney General]; on foot of that, a recommendation was made and a name was given to cabinet.”

She pointed out that the convention is that one name is only ever brought to cabinet for judicial or other appointments. The opposition has argued that under the cabinet handbook, Ms McEntee had an obligation to inform party leaders, the Minister for Finance, the Attorney General and the Taoiseach and Tánaiste of interest in the role from other parties.

The cabinet handbook states that these parties “should be informed in advance of proposals to make [judicial appointments]”.

She told the committee that the name was approved by cabinet “with a very clear process - as Minister for Justice I adhered to that process. And the person that was appointed came through an official process, chaired by an independent body (JAAB), chaired by the Chief Justice himself.”

Barry Cowen, the Fianna Fáil TD for Laois-Offaly, said that he was “more than satisfied” by the explanation given by the Minister for Justice at the committee today. “She was more than adequate in the way in which she dealt with this, at committee and based on the other answers I heard from people in this process,” he said.

Mr Cowen earlier on Tuesday indicated he wanted to hear the Ceann Comhairle’s advice on the issue of asking questions of the Minister for Justice, but he said on Tuesday evening that he did not think she needed to come before the Dáil.

“That’s not to stop parliamentary questions or oral questions, there are many means by which the opposition can seek clarification,” he said, but added his view was “there’s nothing there, this process is no different to any previous ones”.

Opposition parties are likely to continue raising the issue in the Oireachtas, with sources indicating there will be another attempt to move the potential question and answer session back onto the Dáil order of business for next week when the business committee meets on Thursday.