Acting Chief Medical Officer Dr Ronan Glynn warns that Ireland could have a high incidence of Covid-19 cases by January if large numbers of people come home for Christmas. Video: Department of Health 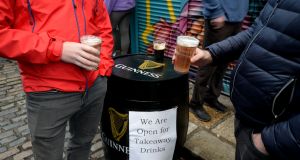 Minister for Health Stephen Donnelly has withdrawn a memo for Cabinet seeking to curtail the circumstances in which people can gather to drink alcohol.

The proposals brought to Cabinet would have made it an offence, punishable by an €80 fine, for two or more people to gather outdoors where one of them is drinking alcohol.

However, there was resistance from the Greens and Fine Gael at the Cabinet table, and it was decided there was not sufficient support for the measure to proceed.

It is understood the memo was drawn up at instigation of the Department of the Taoiseach and in conjunction with the Attorney General.

The memo envisaged a ban on two or more people meeting outdoors to drink takeaway alcohol.

On Monday, it was initially reported that new regulations would prevent pubs from serving takeaway drinks. However, those reports met with resistance from within Government parties, sources said.

Prominent Fianna Fáil backbencher Barry Cowen, the former minister for agriculture, was among the figures to criticise the idea.

The measure was intended to target the individuals rather than the pubs, which would still be able to sell takeaway drinks for people to consume at home.

A source said it was intended to make it easier for the Garda to break up large groups of people drinking together outside.

The move came as a senior National Public Health Emergency Team (Nphet) official warned Ireland could have “hundreds of thousands” of Covid-19 cases by January if large numbers of people come home for Christmas. *

Current efforts to reduce virus cases are also well off-track, assistant chief medical officer Dr Ronan Glynn has indicated, and may not be turned around by the end of Level-5 restrictions on December 1st.

With daily case numbers trending upwards again in recent days, Dr Glynn warned “We need to get to a much better place than this by the first of December.” Referring to the target of under a 100 cases a day by that date, he said: “we’re nowhere near that at the moment”.

Calling on people to avoid non-essential travel over Christmas, Dr Glynn said: “We don’t want asymptomatic people, who are feeling completely well, coming home to this country to meet loved ones, to interact with their extended families across generations; younger people, older people and people with medical conditions.

* The Irish Times is satisfied that this quote is correct. A spokeswoman for the Department of Health said Dr Glynn said “hundreds or thousands”.