Man in his 20s dies after suspected stabbing in Co Mayo 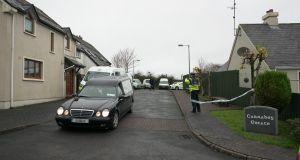 Gardaí at the scene of a suspected fatal stabbing in Swinford, Co Mayo. Photograph: Keith Heneghan

Gardaí were on Tuesday night questioning a man in connection with a fatal assault on a 24-year-old man whose body was found in Swinford, Co Mayo, on Monday night.

Gardaí began a homicide investigation when they called to a house in the Carrowbeg Estate on the outskirts of the east Mayo town at about 11pm on Monday and discovered the body. It is understood the deceased man had suspected stabbing injuries and that gardaí have taken possession of a knife.

The victim was named as Michael McDonagh, whose family live at Carrowmore Drive, Knock. The man arrested at the scene and being held at Castlebar Garda station is a foreign national in his 30s, who had been staying in emergency accommodation. Both the victim and the man who was arrested are understood to be known to each other.

The victim’s remains were removed from the house and taken to Mayo University Hospital in Castlebar where Acting Deputy State Pathologist Dr Kathleen Han Suyin was conducting a postmortem on Tuesday.

Supt Joe McKenna, who is leading the investigation, said the death is being treated as homicide. A family liaison officer has been appointed to the case.

The house was sealed off for technical examination and gardaí were on Tuesday conducting house-to-house inquiries and gathering CCTV.

Gardaí said they are are trying to determine movements of people prior to the fatal incident. They appealed to anyone who may have witnessed any unusual activity in Swinford town between 8pm and 11.15pm on Monday evening to contact Claremorris Garda station on 094-9372080.

Residents of the housing estate spoke on Tuesday of their shock. “It’s so sad, somebody’s child, somebody’s brother,”said Rose Harte. “A party started up last night and it has ended up where we are today,” she said.

“Nobody would want this to happen in their community but it has happened to us. As a community we will rally together and try and get over this and learn from what happened.”