Judge appointment system in Ireland faulted by Council of Europe 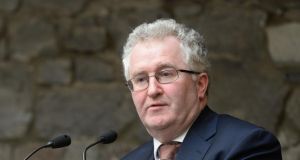 Séamus Woulfe’s name was the only one submitted by the Judicial Appointments Advisory Board after the end of its process. Photograph: Alan Betson

Ireland’s system of appointing judges continues to fall short by not being free from political influence and not selecting the most qualified and suitable candidates, a Council of Europe report has concluded.

The report finds fault, in particular, with the current system involving the Judicial Appointments Advisory Board (JAAB), which submits the names of at least seven people whom it recommends for appointment.

The assessors were critical of this measure because the names on the list are not prioritised or ranked, which it said gives the Government significant power in deciding on judicial appointments.

In the case of former attorney general Séamus Woulfe, his was the only name that was submitted by the JAAB after the end of its process.

There are provisions to name less than seven people if there are fewer applicants or if too few have the requisite qualifications.

The report was compiled by the Group of States Against Corruption, comprising 50 nations within the Council of Europe.

The report assesses Ireland’s implementation of measures aimed at preventing corruption among members of the Oireachtas, judges and prosecutors.

The report concludes that six of 11 recommendations for reform made in 2014 have not yet been implemented. At the same time, it states, Ireland’s “current level of compliance is no longer globally unsatisfactory because progress has been made in the councils.

“One such improvement noted by the report was the establishment of the Judicial Council last year which will oversee conduct and discipline among judges.”

However, it concludes that Ireland has failed to reform its appointment system for judges, which would see a transparent process where the most suitable candidates are selected without improper influence from the Government or parliament.

While the fieldwork for the report was being conducted, former minster Shane Ross’s Judicial Appointment Commission Bill was before the Oireachtas. The Council of Europe group criticised it for having a lay majority as well as a lay chairperson who was answerable to the Oireachtas.

Senior judges including Chief Justice Frank Clarke had written to the Council of Europe complaining about a lack of consultation with them on the matter, as well as the committee having a lay majority and a lay chairperson.

Mr Ross’s Bill was stalled for many months in the Seanad by a small group of Senators intent on filibustering it. It lapsed when the last Dáil came to an end.

The new Government promised to enact a new law to reform judicial appointments within six months of coming into power. Departmental sources confirmed last night that a new Act will not be possible before the end of this year but said the Bill was a political priority.