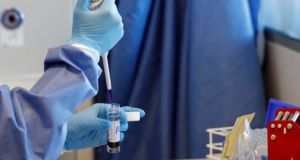 Medical Scientists voted to take industrial action if early progress was not made on a long-standing pay dispute. Photograph: Alan Betson

The Government has indicated that it will not engage in talks on pay at this stage with medical laboratory scientists, who include personnel involved in testing for Covid-19.

Talks on a long-standing claim by medical laboratory scientists for pay parity with scientific personnel working in biochemistry laboratories took place at the Workplace Relations Commission on Tuesday. However it is understood that while Government negotiators were prepared to discuss issues such as grading and career progression, they were not prepared to engage on pay issues at this point.

Medical Scientists voted at the annual conference of their representative association in October to take industrial action if early progress was not made on a long-standing pay dispute.

Separately on Monday the Department of Public Expenditure said that pay issues involving public health specialists – who are currently balloting for strike action – “would fall to be considered in the context (of) wider public service pay policy”.

The Government is currently involved in background exploratory talks with the broader public service trade union movement on the potential for a new pay deal for about 340,000 State employees.

The current accord expires at the end of December.

The largest public service union, Forsa, will hold its biennial conference on Thursday where its general secretary Kevin Callinan – who also chairs the public service committee of the Irish Congress of Trade Unions – is expected to make a key speech on public service pay.

As part of preliminary discussions over recent months the Department of Public Expenditure is understood to have suggested that there would be an effective pay pause in 2021 as part of a new two-year agreement and that there could be sectoral processes established to deal with claims and issues in particular areas of the public service.

The medical scientists’ dispute dates back to 2002 and involves a claim for pay parity with scientific staff who work in biochemistry laboratories. Medical scientists maintain that they carry out identical work, with the same responsibilities, but are paid about eight per cent less.

Public health specialists, who are represented by the Irish Medical Organisation (IMO), have been campaigning for some time for the field to become a consultant-led service and for specialists to be awarded consultant contracts “to reflect their expertise”.

Minister for Health Stephen Donnelly has said he is committed to establishing a consultant-led public health model.

The Department of Health and the HSE are currently drawing up a business case for consultant posts in public health, which is expected to be submitted to the Department of Public Expenditure in the coming days.