Marian Finucane funeral: ‘She made the world easier to live in’

‘She will be remembered for her keen intellect, warmth, wit, and kindness,’ mourners told 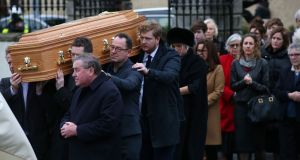 The late RTÉ radio presenter Marian Finucane was remembered as “an icon of Irish broadcasting” at her funeral in Kill, Co Kildare.

The veteran broadcaster – a voice on the country’s airwaves for more than four decades – died suddenly on January 2nd at the age of 69.

Her life and work were recalled with great sadness and fondness at a packed St Brigid’s Church in the Kildare village near Finucane’s home near Naas.

Finucane’s husband John Clarke paid an emotional tribute to “a woman who I have loved for 40 years, a woman who has always made the colours brighter and the world a little easier to live in.”

Marian had decided in the first week of December to retire so she could have more time, more space, more places to visit and more books to read, he said.

“Sadly, that is not going to happen,” he added.

He agreed with the view of someone who once described him and Marian as “two 15-year-old adolescents who were addicted to each other who forgot to grow up.”

“I find myself so powerless I truly don’t know what to do,” he said, fighting back tears.

He recalled a woman at an African township he and Marian had visited a few weeks ago saying: “The only thing I can give you are my tears.”

Mr Clarke added: “And that is all I think I can do today.”

Finucane’s son Jack said that behind his mother’s various public personae, “the woman I knew behind all these selves was a shy lady who was as happy to read a book in silence as she was sitting around the dinner table in the small hours of the morning with friends laughing, joking, singing, when she could remember the words, debating the politics of the day and generally sorting out the world’s problems one dinner party at a time.”

He added: “She was a classy lady with soul in the truest sense.”

Jack, whose wife Jennifer is expecting Ms Finucane’s first grandchild, said that “her spirit would live on when the next generation of the family was born next month.”

More than 600 people attended her funeral service. Mourners heard that Finucane’s sudden death had been a “great shock” to her family and all who knew and loved her.

Chief celebrant Monsignor Ciarán O’Carroll, Finucane’s first cousin and rector at the Irish College in Rome, praised her professionalism and her personality.

“She was such an icon of Irish broadcasting and will always be remembered for her outstanding journalistic abilities, her keen intellect, warmth, wit, thoughtfulness, compassion and kindness,” he said in the homily.

Her influence in Irish life was significant, he said.

“The contribution Marian made to advancing and shaping our nation and its peoples through her professional work as a courageous broadcaster, and her determination to facilitate conversation without fear or favour, was repeatedly and wonderfully captured in countless public tributes paid over recent days,” said.

“She had great empathy and sense of fairness and treated everyone with courtesy and respect. A generous and determined woman, and a thoughtful and kind friend whose keen sense of humour enriched the lives of many, her charity work at home and abroad was simply outstanding.”

The monsignor said that “thousands always enjoyed her programmes” and that she would be “missed on the radio”.

“Publicly the nation has lost a skilled broadcaster. Privately John has lost a soul partner, Jack a loving mother and Jenny a cherished mother in law,” he said.

“The great, exuberant joy shared by our family and friends but a few short months ago at Jack and Jenny’s wedding contrasts now with the sorrow and sadness we experience this day of Marian’s funeral.”

The cleric said Finucane was “blessed with an indomitable spirit which she had to call on often in her full, dynamic and fruitful life. Blessed with energy and dynamism, determined and persistent, she had boundless curiosity about life and the world.”

He recalled how Finucane had to bear the grief over the death of her daughter Sinead who died in 1990 aged eight after developing leukaemia.

“Throughout her eventful life she was privileged to experience many changes and received the grace to confront various, sometimes demanding, challenges,” he said.

“She had to carry the cross of bereavement with the death of her beloved daughter Sinead – a bereavement she bore with tremendous dignity.”

Those who had known her only through the airwaves came too.

“She was like an older sister, one of the family,” said Una Lawlor from Sandymount.

“I loved Marian. I always listened to her in the morning doing the housework. I just feel I have lost a friend.”