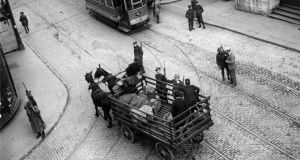 The Government has found out late in the day that disentangling the memory of the Royal Irish Constabulary (RIC) and Dublin Metropolitan Police (DMP) from the other crown forces operating in Ireland during the War of Independence is not an easy task.

On Monday, following calls to boycott the event, Minister for Justice Charlie Flanagan stressed that the commemoration event on January 17th is only to remember those who had served in the RIC and DMP and not the Black and Tans or the Auxiliaries.

Like the British army, which recruited widely in Ireland, these police forces provided a permanent, pensionable position at a time when opportunities were few.

Consequentially even those who were prominent in the Irish struggle for freedom were the sons of RIC and DMP men. They included the fathers of Proclamation signatory Eamonn Ceannt, Eamonn Duggan, a signatory of the Anglo-Irish Treaty, IRA commander Tom Barry and writer Seán Ó Faoláin, Michael Collins’s uncle and the brother of celebrated Antarctic explorer Tom Crean who was killed during the War of Independence.

When the war broke out in 1919, the police were tasked by the British government to take on the IRA. British prime minister David Lloyd George believed the sporadic campaign initially was a law-and-order issue and not a general insurgency.

The Black and Tans and Auxiliaries were recruited when the British government realised the RIC could not cope. Recruitment in England for what became known as the Black and Tans began this month 100 years ago and the first ones arrived in March of that year.

These were followed by the Auxiliaries, who were recruited from among the officer classes and ex-servicemen.

However, the four forces opposed to the IRA have become conflated in the Irish public imagination and they often operated in concert with each other.

For instance, after the Rineen ambush in Co Clare in September 1920 in which five RIC constables and a Black and Tan were killed, revenge was taken by both forces, with five locals killed in a spate of reprisals.