Electric cars will be more economical than petrol, diesel within four years – Bruton

Expert advice suggests tipping point would be around 2024, Minister says 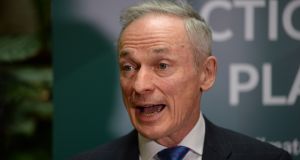 Minister for Climate Action and Environment Richard Bruton TD confirmed methane, the greenhouse gas most associated with agriculture, would be subject to emissions reduction targets though he accepted some sectors might not have to achieve carbon neutrality by 2050. Photograph: Dara Mac Dónaill/The Irish Times

Electric vehicles (EVs) will be more economical than petrol or diesel cars within four years, according to Minister for Climate Action and Environment Richard Bruton.

Commenting on concerns that EVs remain too costly for the average family, Mr Bruton said his expert advice suggested the tipping point in their favour would be around 2024 when long-term running costs were factored in with purchase price.

Mr Bruton was speaking at a briefing on the the Climate Change (Amendment) Bill, which provides for legal enforcement of emissions reduction targets on Government departments, State agencies and key sectors.

Mr Bruton confirmed Government incentives for the uptake of EVs would be phased out over time but the cost of batteries and range improvements would play their part in supporting a switch-over.

The bill includes a ban on fossil fuel car sales from 2030, and it is envisaged almost 1 million EVs will be on Irish roads by then. The bill also enshrines five-year carbon budgets and setting targets for 2050 in legislation.

Mr Bruton reiterated his wish to get the Bill in place before the election, given the need to radically reduce emissions and a lack of climate resilience in many communities – as seen in Australia. “So the window of opportunity to act is very narrow,” he added.

Mr Bruton said he did not know the timing of possible discussions between the Taoiseach and Fianna Fáil leader Micheál Martin on priorities before the Dáil was wound down in advance of an election. But he highlighted Leo Varadkar’s wish that the Government continue to work right up to the end. These included the “huge challenges” of climate action, Northern Ireland, Brexit and a new land development agency.

Mr Bruton confirmed methane, the greenhouse gas most associated with agriculture, would be subject to emissions reduction targets though he accepted some sectors might not have to achieve carbon neutrality by 2050, as it was an overall target.

Stop Climate Chaos Coalition coordinator Oisín Coghlan said there was a need to see the text “before we can judge whether the draft Climate Bill measures up”. He called on all parties to work together to pass a strong climate law before the election.

“This Dáil has seen unprecedented cross-party cooperation on climate action with the laws to ban fracking and divest the sovereign wealth fund from fossil fuels. Passing a strong climate law would be a fitting legacy.”

“Farmers are tired of being kicked around and scapegoated when it comes to climate action. The fact is transport remains Ireland’s biggest climate problem, not livestock.

“Methane is a short-lived gas . . . Yet it’s being benchmarked and wrongly compared to carbon dioxide, which can last up to 200 years in the atmosphere”.

Green Party climate spokesman David Healy welcomed limited details of the Bill and looked forward to it going before the Oireachtas Committee on Climate Action.

“Ireland faces the challenge of decarbonising at a rate of 7 or 8 per cent a year, which is three or four times faster than currently planned. This will require a stronger all-of-government climate action plan and a completely different national development plan reflecting the new ambition,” he said.