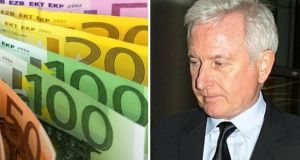 Paddy McKillen’s action concerned fees paid out as part of the liquidation of the Irish Banking Resolution Corporation, which was formed by merging Anglo and Irish Nationwide Building Society.

Property developer and hotelier Paddy McKillen has dropped a case taken against the Department of Finance over an expected €300 million in fees associated with the winding up of former Anglo Irish Bank.

The case, which was initiated last year, focused on an alleged lack of oversight of the fees paid out as part of the liquidation of the Irish Banking Resolution Corporation (IBRC), which was formed by merging Anglo and Irish Nationwide Building Society.

In a second letter sent shortly before Christmas, Mr Moran confirmed that the department had received notice on December 6th that the case was being discontinued.

A second case taken by debtors rights campaigner David Hall has also been discontinued. Mr Hall’s case, while a separate action, turned on the same legal argument as Mr McKillen’s.

In a July letter to the committee, Mr Moran said “[Mr McKillen’s case] is largely identical to that submitted by Mr Hall and both parties have the same legal representatives”. But because a statement of claim had not been submitted in the case the precise nature of Mr McKillen’s claim was unknown.

Mr Hall’s case related to the conduct of the IBRC liquidation, which is being undertaken by Kieran Wallace and Eamonn Richardson of consultancy firm KPMG, and the remuneration and expenses of the special liquidators, as well the oversight of this remuneration by the department.

What about legal fees for barristers?

In their latest report on the liquidation of IBRC, the KPMG team said that fees recorded to date have exceeded €222 million. The fees may ultimately end up as high as €300 million, but the recent resolution of IBRC’s long-running case against the Quinn family has accelerated the timetable for its liquidation by a year. It is now expected to complete by the end of 2021.

Meanwhile in the same letter confirming the cessation of the case, Mr Moran wrote that his department has discontinued the practice of detailing the legal fees paid to individual barristers.

He said the department took the decision due to concerns over data protection. It has received correspondence on the matter from the office of the Data Protection Commission and has referred that advice to the Attorney General for further advice on whether it can return to publishing data on individual payments.

1 Murder in a crowded house: The full story of the Patricia O’Connor trial
2 Shane Ross: ‘I lost a friendship with Mattie McGrath completely. He got totally personal’
3 Areas advised to ‘stop everything’ as Storm Jorge hits Ireland
4 ‘Nobody cares’: Children freeze to death as Syrians flee onslaught in Idlib
5 Coronavirus: Aer Lingus cabin crew in self-isolation after passenger’s positive test
Real news has value SUBSCRIBE