Marching in Donegal: ‘We can be Irish and we can be Orange’

Newtowncunningham lodge trying to reconnect with community after arson 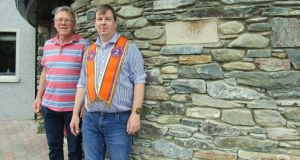 In Newtowncunningham Orange Hall in Co Donegal, yoga class is under way.

Yoga mats are laid out in rows on the floor; at the back of the stage is the lodge’s war memorial, topped with a poppy wreath, which commemorates the seven members of the lodge who died in the first World War.

Two large banners hang from the far wall. One depicts the relief of the Siege of Derry in 1689, the precursor to the Battle of the Boyne; the other shows the local Ulster Volunteers in training in 1913 as they prepared to resist Home Rule.

On Saturday, the 26 members of Newtowncunningham True Blues, Loyal Orange Lodge 1063, will march behind that banner in the “Donegal Twelfth” in nearby Rossnowlagh.

On the coast near Ballyshannon, it is best known as a surfing beach. Yet every year, on the Saturday before the Twelfth of July, Orangemen from the Republic of Ireland – counties Cavan, Monaghan, Leitrim and Donegal – accompanied by lodges from the North, march through the narrow country lanes to the demonstration field before enjoying an ice-cream on the beach or rolling up their trouser legs for a paddle.

“It’s the one day we march in our own country,” says the County Grand Master, David Mahon. “It’s part of our tradition and our culture, and it’s a day out for people who maybe wouldn’t have seen each other since last year. It’s just the local Twelfth.”

Stewart McClean, the Deputy Master of Newtowncunningham lodge, has been coming to Rossnowlagh since he was a child. The Donegal Twelfth is among his earliest memories. “It rained and rained until we were about to go home.”

For him, membership of the Orange Order is about the Protestant faith, family tradition, and a celebration of freedom.

“There are strong family ties,” he explains. “Both of my grandfathers belonged to the Orange, so it wasn’t if I was coming here, it was when.”

Inside the lodge, the smell of fresh paint is everywhere. Though founded in 1911, the building is brand new, rebuilt after the previous lodge was destroyed in an arson attack in 2014.

“I know they say Ireland’s changing,” says lodge secretary Keith Roulston, “but whenever this hall was burned, where did the tolerance go, where did the inclusiveness go? It went up in smoke.”

Hardest for them was the knowledge that the attack had been premeditated: “You started to question things,” says McClean. “You would walk up and down the street and say to yourself, ‘I wonder does he know anything, does she know anything’?”

Roulston is a farmer. “It’s difficult now. The fire changed things. A lot of us are farmers, so we’re totally exposed. I had to go and get sheds and things insured.

“We all have children and families. Ireland portrays itself as a place where immigrants can come in and be accepted. Well, I don’t know how they’re going to accept anyone if they can’t accept us, we’ve been here nearly 400 years.”

Newtowncunningham is a Plantation village, founded by a Scottish settler, John Cunningham, who was granted land in the area in the 17th century. About 10km from Derry, it is one of a number of settlements in east Donegal, such as Raphoe and Convoy, which are noted for their significant Protestant minority. The population of Donegal as a whole is 85 per cent Catholic; while Protestant denominations make up less than 10 per cent.

As such, their identity is multifaceted: “We’re Ulstermen,” says Roulston. “Traditionally, we would have looked at Northern Ireland as the natural place to be – our natural hinterland, if you like.”

McClean says he is British, and has a UK passport. “I’m a unionist, I believe the union between Britain and Ireland should never have been done away with.

Both feel there are misconceptions about the order.

“Whenever you put Orange in front of anything in the Republic of Ireland everyone runs for cover, but when we come here for a meeting, the first thing that’s open is a Bible, and it’s the last thing that’s closed,” Roulston says. “It revolves around faith. We do charitable and other things, but it’s like an extension of a church.”

They reject any accusation of sectarianism against the order: “It doesn’t discriminate against anyone,” says Roulston. All you have to do to be a member of the Orange Order is to be a part of “the reformed faith”, he adds.

“Everybody in Newtown grew up knowing this was the Orange hall and what it was about,” says McClean, “and that everybody was welcome to come through the door.

“But as the population changed during the boom and you had more people moving here from the North it was probably seen in the context of Belfast, or the Troubles, or the Drumcree marches in Portadown, and that has a knock-on effect.

“But probably 95 per cent of the Orange are the guy who goes to church on a Sunday, the guy who’s always here at meetings, the guy who helps out if there are a couple of slates needing fixed on the roof.”

Newtowncunningham’s new lodge – which opened last year – was part-funded by the Government and supported by Donegal County Council. Even during the rebuilding, McClean says, they received threats that it would be burned down again. “We said, we can rebuild it and do what a lot of others do, which is to turn it into a fortress and have shutters on the windows and only open it when we need it, or we can do something different.”

Instead, the lodge applied for funding for a peace impact project; run by McClean, its purpose is to integrate the hall back into the community.

The yoga classes are part of this process; so too are pilates sessions, Spanish lessons, and history lectures.

“It’s about making this building into a place that is actually used by everybody,” he says.