Half of Defence Forces intend to leave within two years, report finds

Members to see immediate rise in take-home pay with €10.1m package of allowances 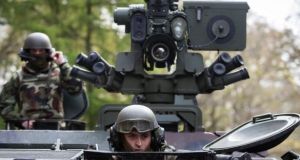 More than 60 per cent of enlisted personnel and non-commissioned officers have indicated they intend to leave the Defence Forces in the coming two years, the report of the Public Service Pay Commission has found.

The report also found that 57 per cent of officers in specialist positions said in a surveythat they planned to leave.

The Commission report warns that both government representatives and staff associations agree that problems of retaining pilots have reached such a point that “essential services by the Air Corps are in jeopardy”.

The document, as The Irish Times has reported over recent weeks, recommends a series of increases in allowances for military personnel.

The report concludes that the Defence Forces are experiencing challenges in retaining personnel.

Members of the Defence Forces are set to see their take-home earnings rise immediately on Thursday as the Cabinet is expected to approve proposals for a €10.1 million package of increases in allowances.

Military service allowances, which currently range from €42 to €123 per week, are expected to be raised by 10 per cent, as part of a move to improve recruitment and retention of personnel. Cuts imposed in 2013 are also expected to be reversed as part of the package. In addition, a loyalty bonus - which could be up to €20,000 - is expected to be put in place to encourage pilots to remain in the Defence Forces.

A review of pay for up to 2,500 members of the Defence Forces with specialist or technical skills is expected to be recommended. Among those likely to be encompassed by such a review would be cooks, mechanics, technicians, fitters, carpenters, aircraft mechanics, military police investigators and air-traffic controllers.

Sources said military organisations may be permitted to hold talks with the Irish Congress of Trade Unions regarding some form of partial affiliation with the trade union movement. However, sources said the Government would not grant Defence Forces members the right to go on strike. Minister for Public Expenditure Paschal Donohoe is expected to tell the Cabinet that the cost of increasing the military service allowance by 10 per cent would be approximately €4.8 million in a full year.

The proposals, which are to be presented to Cabinet by Mr Donohoe, are based on a report drawn up by the Public Service Pay Commission. If approved by Government, as expected, the new increased allowances would come into effect immediately. The commission’s report will likely be published by Mr Donohoe and Minister of State at the Department of Defence Paul Keogh later on Thursday. The pay proposals were due to be announced earlier this week, but the Tuesday Cabinet meeting was rescheduled as the Taoiseach Leo Varadkar attended the extended EU summit in Brussels.

Numbers in the Defence Forces have continued to fall despite recent recruitment campaigns. The full strength of the Army, Naval Service and Air Corps combined should be a minimum of 9,500 personnel, but has now fallen below 8,500. This is the lowest point since numbers increased in the 1970s in response to the Troubles. There have been concerns in Government over recent weeks that its planned package for the Defence Forces would not meet the expectations of those campaigning for improved pay and conditions.

Following the publication of its plans, the Government is likely to wait to see whether the military representative bodies decide to put the new proposals to a ballot of members. Sources said Wednesday night the organisation representing enlisted personnel, Pdforra, would read the proposals and decide on whether to put the measures to a ballot.

The Public Service Pay Commission report is expected to say it was constrained by its terms of reference from making recommendations on increasing core pay for Defence Forces personnel. It will instead propose increases in allowances for Defence Force personnel and urge that other reviews of remuneration for those in technical and specialist areas take place.

The commission will say the Defence Forces are facing a unique challenge in retaining pilots, with official projections suggesting the numbers in place may be close to 30 per cent lower than the approved levels this year. It will urge the re-introduction of a loyalty bonus scheme which could be worth nearly €20,000 to pilots.

The report is also likely to highlight difficulties in retaining other key specialist personnel such as military aircraft maintenance technicians, air traffic controllers , engineering and ordnance officers in the Army and engineers in the Naval Service.

The commission is also expected to say it has evidence of retention difficulties at captain and certain non-commissioned officer levels and that some system of incentivising such personnel to remain in place should be looked at as a priority in future pay negotiations.

The report is due to propose that a pay review be undertaken for personnel in technical pay grades and to suggest that there should be significant reforms to the way personnel are recruited.

It is likely to argue the Government should consider extending the permitted age for new entrants and re-enlisting or re-commissioning retired staff to assist in the training of new personnel. This would allow serving personnel to concentrate on operational duties. The report is also expected to call on the Government to put in place a series of non-pay measures to try to assist in the retention of military personnel.

The commission will say it was prevented by its terms of reference from undertaking a general review on behalf of any group. The report will say the pay structures of the Defence Forces should be examined in the future as part of a general review - which the commission had previously proposed in a report last year - of the adequacy of pay arrangements in the public service.

It will urge that the military service allowance be increased by 10 per cent with a minimum increase of €350 per year applicable to those on lower rates of the allowance.

The report will also recommend that as a result of the absence of overtime or limits on working hours in the Defence Forces, cuts made to a number of other allowances in 2013 such as the security duty allowance and the patrol duty allowance for naval personnel should be reversed.