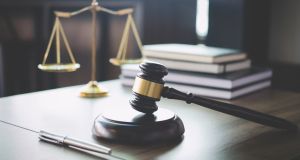 Teenager became aware that she was being followed by a man dressed in dark clothing with a hoodie top and she became so nervous that she got out her phone to try and ring a friend.

Polish national Daniel Szymczyk was charged with a total of three offences arising out of the incident which happened as the teenager was walking home alone in Bandon in west Cork shortly after 3am on December 1st, 2019.

Mr Szymczyk was charged with assault causing harm to the woman at Ballymodan Place, Bandon on December 1st, 2019, contrary to Section 3 of the Non Fatal Offences Against the Person Act 1997.

He was also charged with robbery of the woman’s handbag and contents worth €82 and with criminal damage to the woman’s iPhone, valued at €400, both on O’Mahony’s Avenue, Bandon, also on December 1st.

Det Garda Peter Nolan gave evidence of arrest, charge and caution at the special sitting of Bandon District Court on Saturday morning and told the court that Mr Szymczyk made no reply to any of the three charges after caution.

Insp Brian Murphy said that gardaí were seeking a remand in custody and Det Garda Nolan outlined the Garda objections to bail when asked by Judge James McNulty for the background to the case.

Det Garda Nolan said that gardaí were objecting to bail on the grounds that they believed that Mr Szymczyk would commit further offences if granted bail and he referred the seriousness of the offences before the court.

He said that gardaí were objecting because of the violence used in the incident where he alleged that Mr Szymczyk followed the complainant in the case as she was walking home alone around 3am on the day in question.

He said the teenager became aware that she was being followed by a man dressed in dark clothing with a hoodie top and she became so nervous that she got out her phone to try and ring a friend.

The State would allege that Mr Szymczyk grabbed her phone to prevent her making the call and threw it on the ground, smashing it before then grabbing the teenager by the arm and forcing her to turn around and accompany him.

Det Garda Nolan said the State would allege Mr Szymczyk forced the teenager to walk back some 200m along O’Mahony Avenue with the teenager attempting to knock on windows and doors of houses to raise the alarm.

He said the State would allege Mr Syzmczyk held his hand over the teenager’s mouth to prevent her screaming for help and was forcibly walking her towards some unlit ground at Ballymodan Place when she saw three men approach.

He said that the State would allege the teenager waited until the three men were close by before she screamed for help and that Mr Szymczyk released her before punching her to the ground and kicking her with force into the face.

The teenager suffered cuts and injuries to her face in the assault while the State would also allege that Mr Szymczyk grabbed her handbag and fled the scene as the three young men came to the teenager’s rescue.

Det Garda Nolan said that gardaí believed the strength and nature of the evidence that they had gathered in the case was such that they were able to link Mr Szymczyk to the offences with which he was charged.

The evidence included over 100 hours of CCTV footage from some 20 locations in Bandon in which they were able to identify Mr Szymczyk from his clothing, footwear and gait as well as directly in images, he said.

He said that Mr Szymczyk had identified himself on some of the footage when it was shown to him during questioning while he had also made certain admissions in relation to the assault and robbery during interview, he added.

Det Garda Nolan said given the fact the robbery charge carried a penalty up to life imprisonment upon conviction, gardaí believed Mr Szymczyk, as a young single man with limited ties to Bandon, would not stand trial if granted bail.

Defence solicitor Myra Dineen said Mr Szymczyk, who has been living in Bandon for over five years with his parents and a younger sibling and was working locally, was willing to abide by a number of bail conditions.

Judge McNulty noted the alleged incident had attracted some attention and notoriety locally and had caused some alarm given the fact the alleged victim was local and the early hour at which it is alleged to have occurred.

He said he was refusing bail at this juncture but it was open for Ms Dineen to reapply for bail again at some future date when it could be reconsidered in the light of the accused being able to produce a substantial surety.

He remanded Mr Szymczyk in custody to appear again at Bandon District Court on December 19th while he also granted him free legal aid and requested the media to neither publish the teenager’s name nor Mr Szymczyk’s address.