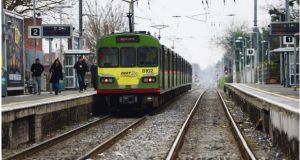 Iarnród Éireann has said the services to Tara Street remain suspended at the request of the gardaí. File photograph: Bryan O’Brien

Services ceased at approximately 5.30pm on Friday evening due to a man on the line, Iarnród Éireann said.

The young man involved had been sitting on the bridge approaching the station from Connolly. The station was shut down while gardaí dealt with the incident. Dart services were terminating on the southside at Pearse Street Station and on the northside at Connolly Station.

In a post on Twitter, Iarnród Éireann said services to Tara Street were suspended at the request of gardaí.

“Services are now resuming subject to delays,” the company said.

Gardaí suspect botched murder attempt was bid to avenge Mulready-Woods death 11:56
Election 2020: ‘We all think the health service is a lost cause’ 11:55
Churches urge faithful to exert pressure on politicians over housing 11:53
GRA says lack of resources will leave gardaí ‘without armed backup’ 11:49
Clothing and footwear seized in Cameron Blair murder inquiry 11:08