Varadkar: way to investigate Dara Murphy’s attendance must be found 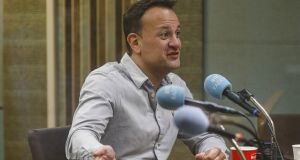 Taoiseach Leo Varadkar has said an independent person may be appointed to investigated Dara Murphy’s Dáil attendance record and expenses.

Speaking on the Marian Finucane programme on RTÉ radio Saturday morning, Mr Varadkar said “we’re going to have to find a way” to investigate the former Cork North Central TD.

“We need to find an alternative option, we might be able to appoint an independent person to examine it,” he said.

Mr Murphy has been criticised for claiming full parliamentary and travel allowances of €4,300 per month despite spending much of the last two years working in Brussels as campaign manager for the European People’s Party (EPP), the centre-right grouping to which Fine Gael is aligned.

Mr Murphy resigned as a TD on December 3rd, hours after the Government won a no-confidence vote in Minister for Housing Eoghan Murphy.

The former Cork North Central TD has taken up a new full-time post as deputy head of cabinet for Bulgarian EU commissioner Mariya Gabriel in December.

The datelines of Mr Murphy’s tweets suggest he was in locations such as Malta, Warsaw, Brussels and Paris on days he signed in on the Dáil electronic fobbing system.

This suggests he recorded his attendance on the fobbing system either after flying back from or before flying out to those destinations.

Speaking on Saturday, Mr Varadkar said although he had been aware Mr Murphy had taken up a new role as campaign manager for the EPP, he did not officially sanction it.

Mr Varadkar said “if it’s found he’s broken the rules, he should pay the money back”.

Mr Varadkar also said Mr Murphy was not at the bottom of the list when it came to turning up for votes.

Sincere apology
The Taoiseach also criticised a controversial campaign video released by Verona Murphy, the Fine Gael candidate in last month’s Wexford by-election, which suggested she had been the victim of a campaign of character assassination by the media.

Ms Murphy made, and then withdrew and apologised for, comments about asylum seekers being linked to Islamic State and suggested they may need “de-programming”.

Asked why he had canvassed with Ms Murphy following these comments, Mr Varadkar said she had apologised and withdrawn them.

However, he added: “What was done subsequently in terms of the video she did which sort of tried to imply the whole thing was a media character assassination attempt on her - I had a big problem with that because maybe it suggested to me that the apology and retraction wasn’t fully sincere.” He said Ms Murphy had been vetted prior to her selection as a candidate and would have had mock media interviews where questions on issues like direct provision would have been asked “and that wasn’t the answer given”.

He said her future in the party was not yet decided and that a process would be followed, but added that lapses in ethical standards in Fine Gael had been punished before by removal from the ticket.

Brexit
The Taoiseach said he spoke to the recently re-elected UK prime minister, Boris Johnson, by phone Friday night, and the pair agreed that talks on the future of the Stormont executive should be restarted next week with a view to having an executive and assembly in place by the end of January.

He said Mr Johnson is “is the guy you see on TV, witty and intelligent, on occasion a little bit eccentric, but somebody who at least so far is someone I felt I could meet and deal with and has been honourable in any agreements we have come to or any understandings we had”. The Taoiseach said he believed Brexit would happen on January 31st, and said the European Union would seek a close relationship with the UK, albeit not one that could lead to standards being undermined.

“We must have common minimum standards . . . we’re not going to agree to that if you’re going to try and undercut us on health and safety, on labour rights, on environmental protections,” he said.

He said now is not the time for a Border poll. “I think that’s the wrong approach now for Norther Ireland given there is not a nationalist majority in Northern Ireland . . . It would probably be defeated, it would probably be very divisive.” Instead, he argued that all parties should recommit to the Belfast Agreement.