Varadkar was responding to news of boy’s letter to Father Christmas: ‘Please come to my hotel again with Batman toys’

An Taoiseach Leo Varadkar, responding to Mary Lou McDonald, has reassured any children who are living in emergency accommodation or staying in hospital that Santa will find them this Christmas. Video: Oireachtas TV 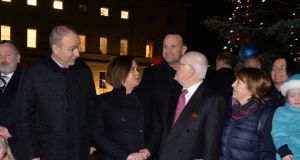 The Taoiseach re-assured worried children in hospitals, hotels and other emergency accommodation that Santa will find them on Christmas Eve.

Leo Varadkar told the Dáil that he shared the concerns expressed by Sinn Féin leader Mary Lou McDonald about children in homeless accommodation who were anxious that Santa might not find them this year.

“I share your concern about children in the run up to Christmas concerned about whether Santa will be able to find them on Christmas Eve - and he will.

Ms McDonald highlighted the letter to Santa from Kevin Maughan (7) that featured on the front page of the Irish Daily Mirror on Wednesday in which he said “please come to my hotel again with Batman toys”.

His was one of the cases highlighted in a document “The Humans of the Housing Crisis” compiled by the Sinn Féin leader and her party on the housing stories of people in crisis. She said “nothing could have prepared me for the trauma and heartache in those cases”.

Ms McDonald said “your housing policy is failing and things are not okay”.

She said “when I observe your reaction to the human stories of loss and heartbreak and the casualties of your failed policies” the Government “doesn’t care”.

He said that “in my assessment I care a lot more about housing than you do and that’s why I’m willing to serve in Government”.

He said Sinn Féin walked out of Government in Northern Ireland.

The Taoiseach told Ms McDonald that “you try and make out that you have some sort of monopoly on compassion”. He said that if she had “you would have stayed in government and solved these problems”.