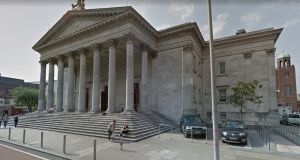 A young man has been remanded on bail after he was charged in connection with an armed robbery in Cork at the weekend where filling station staff were threatened by a man armed with a machete.

Jamie Quilligan (23) was brought before Cork District Court on Tuesday where he was charged with robbery of the Circle K filling station on the Blackrock Road inCork on November 17th.

Garda Conor Egan gave evidence of arrest, charge and caution in relation to charging Mr Quilligan, who lives at Chestnut Close, Green Park, Mahon on Cork’s southside, with the offence.

Sgt Gearoid Davis said gardaí had no objection to Mr Quilligan obtaining bail once he was willing to abide by certain conditions and defence solicitor Frank Buttimer said his client was happy to abide by the conditions sought by gardaí.

Garda Egan said gardaí were seeking Mr Quilligan to reside at his home address at Chestnut Close, Green Park, Mahon and to abide by a curfew that he stay at the house between 10pm and 6am each night.

Gardaí were also seeking that Mr Quilligan sign on daily at Anglesea Street Garda Station every day between 9am and 7pm and that he provide gardaí with a mobile phone number where he can be contacted at all times.

Gardaí were also seeking that he would abstain from all intoxicants while on bail and that the would have no contact, direct or indirect, with any of the staff working at the Circle K garage on the Blackrock Road.

Judge Olann Kelleher remanded Mr Quilligan on these terms on his own bond of €400 to appear again on January 7th 2020 after Mr Buttimer said that his client had no objection to a long remand in the case.