Malthouse compromise: an idea whose time has come – and gone 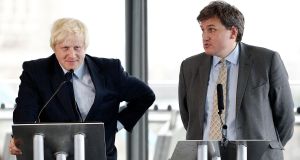 Kit Malthouse, right – who gives his name to the Tories’ Malthouse compromise – and Boris Johnson in 2011. Photograph: Matthew Lloyd/Getty Images

The so-called Malthouse compromise was acclaimed this week as evidence that the various wings of the Tory party were coming together on Brexit.

But what is the compromise, and does it have any chance of success?

It proposes that the UK and EU negotiate a free-trade agreement after Brexit and that technology and advanced customs procedures be used to eliminate the need for any infrastructure at the Irish Border.

In essence it resurrects the previously dismissed idea of “maximum facilitation” – or max-fac – which would leave some checks on goods passing the Irish Border to technologies.

The compromise is based on a Brexiteer document produced last December, which said there would also be technical roadside checks, even though these could be carried out “at a reasonable distance from the Border”. Customs declarations could be carried out on the factory floor.

The compromise will be rejected by the EU even if it is ever seriously tabled by the UK, which is unlikely.

And even if such technological solutions are examined as way of handling the Border in the event the UK leaves the EU without a deal, industry figures say it would be a logistical nightmare. “Everywhere you turn on this one, it just gets ugly,” said one.

Moving the Border down the road does not solve any problems, and will still cause difficulties for businesses that currently move freely over its many crossings – a political red line for the Government.

Trade experts say the use of technology and online management tools can reduce the need for physical checks but not by any means eliminate them.

Chief executive of employers’ group Ibec Danny McCoy says that “with max-fac, the technology just isn’t there at the moment.”

The complicating factor in the case of Brexit is that the UK, and thus the North, is to leave the two key parts of the EU trading bloc, the customs union and the single market.

This creates the need for two different types of physical checks as goods cross from the UK into the EU single market. There is a need to clear goods through customs, and also to ensure that rules and regulations in areas such as food and product safety are met.

McCoy says the extra burden of a system that moves customs checks to factory floors is an issue.

“Some may be able to absorb that, and some can’t. You are passing the burden on to business for something that should be a duty of the government.”

Dr Katy Hayward of Queen’s University Belfast says making customs declarations electronically is just one part of the required procedure. It also “requires countervailing measures to minimise the risk of smuggling and fraud”, which would probably lead to the physical infrastructure the EU and UK have both promised to avoid.

For Verona Murphy of the Irish Road Haulage Association, there is no middle way that could allow the UK leave the single market and customs union and also avoid border checks.

“If you don’t have a deal, you are just going to put customs where they were,” she said.

The other key issue is controlling and checking the movement of livestock, food and plant products. Currently Ireland North and South are a common area for so-called single phytosanitary region, meaning livestock, plants and food can move freely.

Checks are conducted at Larne as products enter from the UK. Under the original, Northern Ireland-only backstop plan, these checks were to be stepped up to meet full EU standards.

Unless this plan to increase controls at Larne is revived, then food, plants and livestock would need to be checked at or near the Border.

Pat McCormack of the Irish Creamery Milk Suppliers Association said neither the haulage industry nor producers would be able to deal with any delays caused by such checks.

As the UK diverged more in future away from EU rules, this would become all the more important, particularly if food products were entering the UK from third-country markets.

The prospect of cheaper goods from other countries competing with Irish agricultural produce is as much of a nightmare as Border checks to many farmers.

Joe Healy, the president of the Irish Farmers’ Association, said any revised deal has be similar or better to the backstop, such as membership of the customs union and single market.

“I would hate if we don’t get a deal,” he said. “But a bad deal wouldn’t be any better. There’s no point doing a deal just for the sake of it. Having access to the UK market is only worthwhile if the value of the market is maintained.”