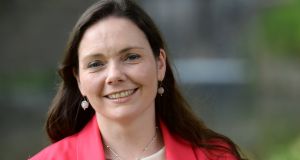 Patricia Callan, director of the Alcohol Beverage Federation of Ireland: “We have six weeks to go and I need to know what to put on my product in April.” Photograph: Dara Mac Dónaill/The Irish Times

The Government must urgently address North-South trade issues to help businesses prepare for a possible no-deal Brexit, the representative group for the €2 billion alcohol industry has said.

The Government is not planning cross-Border contingency measures to help businesses prepare for a range of changes – from tariffs to labelling – arising under a no-deal scenario, the Alcohol Beverage Federation of Ireland (ABFI) has said. The body is an all-island one which represents small breweries to large drinks manufacturers.

It highlighted shortcomings in the Government’s no-deal omnibus Bill, published on Thursday, because it failed to cover North-South issues that would arise from the UK crashing out of the EU without a deal on March 29th.

The Bill focused on “business as usual stuff” covering east-west trade with the UK, the group said.

The Government has not yet outlined how North-South trade would manage should Northern Ireland and the rest of the UK leave the EU in a disorderly exit. It is instead banking on its preferred option, the UK ratifying the EU-UK divorce deal, including the “backstop” guarantee to maintain an open Border.

The drinks industry group, which represents more than 50 distilleries and breweries on the island of Ireland, said the Government was not planning around North-South issues under a no-deal Brexit because it would “concede a political point” if it was seen to be preparing for a hard Border.

“The Government are so dedicated to there being no physical or fiscal frontier at the Border that they are refusing to do any North-South work; they will only do east-west work,” said ABFI director Patricia Callan.

“With so little time left, that is not practical. We have six weeks to go and I need to know what to put on my product in April.”

The representative body said it was “surprised” that, despite intensive lobbying of Government departments, the omnibus Bill did not include a measure that would protect the cashflow of drinks manufacturers that source raw materials and other ingredients in Northern Ireland under a no-deal Brexit.

ABFI said some of its members in Border counties have, at any one time, up to 40 suppliers on the other side of the Border.

If there was no Brexit deal covering VAT, they would – for the first time since 1993 – have to pay an import VAT charge upfront at the point of importation as it crosses into the State.

The federation, along with other business representative groups Ibec and the Small Firms Association, called on the Government to include a provision in the omnibus Bill that would allow companies claim VAT as an input credit at the same time they declare their liability.

This would mean that they would avoid the upfront payment when the goods are imported that would eat into their cashflow, causing a financial strain for companies.

Ibec said that it was “disappointing” that this measure was not included in the Bill. The groups said that without it businesses face “significant cashflow disruption” and increased administration and compliance costs.

“Other member states have already made this provision and Ireland urgently needs to do so,” said Fergal O’Brien, director of policy and public affairs at Ibec.

ABFI said that the UK’s HM Revenue & Customs had introduced this change so drinks manufacturers in Northern Ireland will not be affected under a no-deal scenario. The group called on the Department of Finance and the Revenue Commissioners “to clarify their intentions in this regard”.

Ibec and the SFA said the Government needed to secure “further flexibility”? on EU State Aid rules to help businesses negatively affected by a no-deal Brexit.