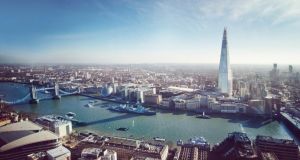 A total of 14,000 young people, including hundreds of Irish, are taking part in education and training programmes in the UK under the Erasmus+ programme Photograph: iStock

Hundreds of Irish students who are participating in the Erasmus+ programme in the UK will be able to complete their stay in the event of a no-deal Brexit, according to the European Commission.

There have been growing fears that students and trainees would not be eligible for grants or receive funding to complete their Erasmus programmes in the UK in the event of a hard Brexit.

However, the European Commission has announced a final set of contingency proposals for the Erasmus+ programme.

Under the plan, it says young people from the EU and the UK who are participating in the Erasmus+ programme on March30th, 2019 can complete their stay without interruption.

A total of 14,000 young people, including hundreds of Irish, are taking part in education and training programmes in the UK under the Erasmus+ programme.

About 7,000 UK participants are taking part in similar programmes across the EU.

Earlier this week, youth organisations highlighted warnings in a revised official programme guide for young people taking part in the Erasmus+ programme which stated that funding was not guaranteed for applicants in the event of a no-deal Brexit

Michael McLoughlin of Youth Work Ireland said a “chill factor” was occurring with groups being reluctant to apply for funds due to this warning.

“The Erasmus+ programme is enormously popular and a real resource for young people and students, it is an excellent programme and facilitates considerable intercultural learning and dialogue including between the UK and Ireland,” he said.

The European Commission has also said EU member state authorities will continue to take into account periods of insurance, employment or residence in the United Kingdom before withdrawal, when calculating social security benefits, such as pensions.

In addition, UK beneficiaries of EU funding will continue to receive payments under their current contracts, provided that the UK continues to honour its financial obligations under the EU budget.

This issue is separate from the financial settlement between the European Union and the United Kingdom.

“Today’s proposals are temporary in nature, limited in scope and will be adopted unilaterally by the EU,” according to a European Commission statement.

“ They take into account discussions with member states. The commission will continue to support member states in their preparedness work and has intensified its efforts, for example, by organising visits to all EU27 capitals.”