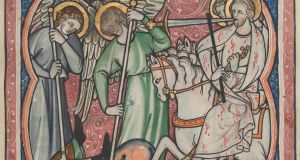 A scene from the ‘Dublin Apocalypse’ manuscript. Photograph: Board of Trinity College Dublin

Medieval society was both fascinated and appalled by the prospect of the apocalypse as outlined in the Book of Revelations.

The last, and one of the most difficult books in the Bible, is replete with imagery which have endured in the popular imagination; the four horsemen, the number of the beast, the serpent and the whore of Babylon to name a few.

The Dublin Apocalypse dates from the 14th century when the Black Death ravished Europe and many believed the end of days and the second coming of Christ was at hand. It is a handwritten version of the Book of Revelations and is accompanied by illustrations in gold and vivid colours.

It depicts scenes of the horsemen of the apocalypse, battles with many-headed beasts and the heavenly Jerusalem.

The text is in Latin. The book was aimed at the literate, mostly then the wealthy in society and the clergy.

Trinity College Dublin will hold a symposium on Friday to celebrate the digitisation of the Dublin Apocalypse which will make all its 118 pages available to a global audience.

Trinity’s professor Laura Cleaver said the illuminated manuscript was of international importance and was a particularly brilliant version of apocalyptic literature which was common at the time.

She said: “The manuscript is remarkable for its illustrations. Unusually the images rather than the Latin text dominate each page. Aside from its stunning beauty, the manuscript provides great insight into the long tradition of apocalypse manuscripts and how our ancestors contemplated the end of days.”

The symposium, organised by the Library of Trinity College Dublin, in conjunction with the School of History and Humanities and the School of English, will draw together experts in their fields to discuss multiple aspects of the Dublin Apocalypse and its broader context.

The book is thought to have originated in East Anglia. It was given to Trinity College by its provost at the time Dr Franc Sadleir.

It was largely unknown internationally until it was exhibited in 1930 in London’s Victoria & Albert Museum and drew huge crowds.

She added: “This symposium, bolstered by the recent imaging of the manuscript, forms part of the library’s programme to unveil our unique medieval manuscript collections, making them visible and accessible online like never before.”

The full Dublin Apocalypse can be viewed at https://digitalcollections.tcd.ie/home/#folder_id=1900&pidtopage=MS64_063&entry_point=11