All healthcare workers in North to receive £500 ‘special recognition payment’ 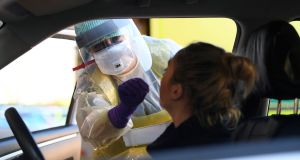 A total of 68 people with coronavirus are in intensive care as of Wednesday afternoon. Photograph: Michael Cooper/PA Wire

All healthcare workers in the North are to receive a “special recognition payment” of £500 in acknowledgement of their efforts during the pandemic.

Qualifying students that have been on clinical placement from October 2020 to March 2021 will also receive a one-off payment of £2,000.

The payments are subject to approval from the North’s Minister for Finance, but the Minister for Health, Robin Swann, said he intended to make the payments as soon as possible. He said he was also working on a one-off payment for carers “as a small recognition for the exceptional contribution that they make to our society”.

The deaths of a further 16 people with coronavirus were announced in Northern Ireland on Wednesday, the North’s Department of Health, bringing the total number of fatalities to 1,779.

A further 527 cases of the virus were confirmed.

However the number of people hospitalised with the virus is falling. In the North’s hospitals, 775 people are receiving treatment for Covid-19, compared to 938 a week ago. A total of 68 people with coronavirus are in intensive care.

The North’s Chief Medical Officer, Dr Michael McBride, told reporters on Wednesday that while hospital admissions had passed the peak, they remained at an “extremely high level.” Staff were still under severe pressure and would remain so for a number of weeks, he said, as would intensive care units.

The new, more virulent strain of the virus, which originated in the south of England, now accounted for probably between 40 and 50 per cent of cases in Northern Ireland, he said.

Dr Patricia Donnelly, who leads the vaccination programme in the North, said a further delivery of the AstraZeneca vaccine had arrived on Tuesday, and another was due next week.

There was now sufficient supply of vaccine to inoculate everyone over 75 in the North, and to begin vaccinating the over 70s, she said.

Dr Donnelly said she had not experienced any shortage of the vaccine, and the deliveries received in Northern Ireland had been “what we are expecting so far.”

Ministers took part in a call with the other UK nations on Wednesday around plans outlined in England to introduce mandatory quarantine in hotels for arrivals from countries with high levels of Covid-19, with a further call scheduled for Wednesday evening.

The Minister for Education in the North is to bring a paper to the Executive on Tuesday regarding plans to reopen schools, which are currently closed until after the half-term holiday in February.

Meanwhile, weekly Covid-19 testing is to be introduced for staff and pupils at special schools in the North from February.

Special schools have remained open during the lockdown currently in force in Northern Ireland, while other schools have closed to limit the spread of the virus.

The tests will use a new, saliva-based technology called LAMP which is expected to be easier for children than swab testing.

The Minister for Health said it was a “significant development” which would “allow positive cases to be identified early so that they and their contacts can isolate, helping to prevent further transmission of Covid-19 within these school settings”.