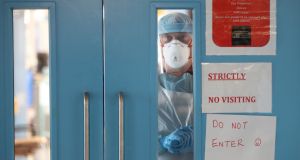 Over 3,000 people have died in the Republic from Covid-19 since the pandemic began. Photograph: Niall Carson/PA Wire

A further 54 deaths and 1,335 new Covid-19 cases have been reported by the National Public Health Emergency Team (Nphet) this evening, with 50 of the deaths occurring this month.

The median age of those who died was 85. The youngest among the deaths reported on Wednesday was 55 years old, and the oldest was 96.

Dr Tony Holohan, the State’s chief medical officer, cautioned people that “now is not the time to drop your guard” and meet up with others from outside their households.

“The current 14-day incidence remains more than double the peak incidence experienced during previous Level 5 measures in October,” he said.

Despite recent improvements, the level of transmission in the community remained “very high,” Dr Holohan added.

“We must continue to work towards reducing incidence of disease and preventing further hospitalisations and deaths,” he said.

The five-day moving average, one of the key metrics tracked by officials, currently stands at 1,383 cases.

The median age of confirmed cases was 43, and 54 per cent were under 45 years of age.

Some 437 cases were located in Dublin, followed by 114 in Cork, 78 in Galway, 71 in Meath and 61 in Louth. The remaining 574 cases were spread between the remaining counties.

The national 14-day incidence rate of the disease, which is the rate at which it is spreading, is 674 cases per 100,000 people.

Monaghan is the county with the highest incidence rate, with 859 cases in the 14 days up to January 26th.

Earlier, Tánaiste Leo Varadkar warned that any easing of restrictions after March 5th will be very gradual, and only if the number of cases of Covid-19 is low.

There will be no jump from Level 5 to Level 3 restrictions on that date, he warned.

The number of cases would have to be in the low hundreds and the numbers in ICU down to 50, and the most vulnerable would have had to have been vaccinated, before restrictions start to ease, he told RTÉ radio’s News at One this afternoon.

Mr Varadkar also defended the Government’s mandatory quarantine plans, but said it would take a few weeks to “operationalise this” and primary and secondary legislation would be required.

The new rules will require everyone arriving into the State via an airport or port to undergo a period of mandatory quarantine for 14 days or five days if followed by a negative PCR test.

Other members of the Cabinet believe there is a much higher potential for new cases to enter the country via international travel.

A hotel at the airport would be needed for those required to quarantine, he said.

Initially the number of people in quarantine would be “quite small”, but the Government wanted the capability to expand the facility more widely, if the EU required such measures to be extended to other countries.

Co-ordination with Northern Ireland, the UK and the EU would be needed, he said.

“This is an opportunity to build capacity and to learn how hotel quarantine works.”

Lots of practical difficulties needed to be worked out, he said, but in the meantime a negative PCR test in the past 72 hours was still required for people arriving into the country.

But he warned that enforcement could never be 100 percent.

That was where the “disincentive effect” and legislation came in. Gardaí would have the capacity to prosecute people who were supposed to be quarantining if they were found outside their home.

Meanwhile, Government has said legislation needed to enforce mandatory quarantine on people traveling from the UK and EU countries will take weeks, not months to implement, a senior Government official has said.

The Cabinet announced a range of mandatory quarantine measures last night. They include mandatory quarantine at a designated facility for passengers who can’t provide a negative pre-departure Covid-19 test as well as all those travelling from Brazil and South Africa due to new variants of the virus in those countries.

Other passengers are to be required by law to quarantine at home. Applying mandatory quarantine measures to EU or UK citizens requires changes to primary legislation.

Assistant Secretary General of the Department of the Taoiseach, Liz Canavan, said on Tuesday morning that officials began work on this “straight away”.

Asked for a timeline on when the rules can be applied to UK and EU citizens she said it would be “shortly” adding that the aim is to have the legislation “brought forward in the next couple of weeks”.

Ms Canavan said officials are examining whether the measures related to mandatory quarantine at home requires legislation or whether it can be brought in through regulations and said she expects clarity on this point today.

Gardaí have already started checkpoints near Dublin Airport and are also to start checking people arriving at the airport to see if they left the country in breach of the regulations.

“Where people are determined to ignore the regulations on travel, they will face increased penalties,” Ms Canavan said.

Taoiseach Micheal Martin told the Dáil that he hopes the “broad range of regulations” that will result from Tuesday’s Government decisions on Covid-19 restrictions to be drawn up by the end of the week.

It came after Labour TD Ged Nash criticised what he claimed was the Government’s “lax attitude” in bringing in regulations to allow Gardai to enforce travel restrictions on non-residents transiting through the State.

Mr Nash referred to Government plans to set up check-points 5km from the border with the North to crackdown on non-essential travel between the two jurisdictions.

The Louth TD later said on Twitter that his party had been calling for restrictions and sanctions to apply to non-residents since last April and that the Government move is a “welcome if belated development”.

Government officials have also on Wednesday been considering plans for the reopening of schools. Schools for children with special educational needs could reopen in mid-February if unions consent and if the incidence of Covid-19 continues to drop, it is understood.

Government sources are hoping to conclude intensive discussions with unions and educational bodies this week in order to present a clear strategy on the reopening of schools to parents and students.

This will be contingent on unions getting their members on board. It is understood Government officials met today and discussed risk mitigation measures in education, the model of re-opening as well as the sequencing and time frame.

Sources believe there could be movement in relation to special educational schools in around two weeks’ time although no dates have been formally fixed yet.

The Government is keen to ensure that union members are in agreement with the plan in order to avoid another “non-reopening”.

Another meeting will take place later on today between the Minister for Education Norma Foley and education partners to discuss possible contingency plans for the Leaving Certificate.