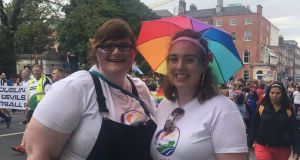 Members of Macra na Feirme marched in the Dublin Pride parade this weekend, marking the first time in the organisation’s history that it has been officially represented at the event.

About 35 members of Macra na Feirme participated, some marching behind the organisation’s banner and others standing on a trailer attached to a rainbow-wrapped Massey Ferguson tractor.

National treasurer Una Ryan said the group was “super excited” to be able to take part in this year’s Pride event.

“As an organisation that is very much focused on social isolation and trying to resolve that within rural young people, being able to take a stand and be quite visibly here to support our LGBTQ+ members is amazing,” she said.

Macra na Feirme has an estimated 8,000 members across the country and works to promote the interests of young people living in rural Ireland, including young farmers.

Ms Ryan said the organisation did not have numbers on how many members identify as LGBTQ+.

“We are living in an Ireland that is changing very quickly, and it takes a bit of time for people to be comfortable to come out and actually say who they are and feel as though they are going to be accepted for who they are and living their lives the way they want to,” she said.

Ms Ryan estimated that there were eight to 10 LGBTQ+ members taking part in this year’s Pride. She noted that some members were “a little apprehensive” about taking part.

“For a lot of people, they may be out to a small group of people but coming out publicly is a big thing,” she said.

“One of the things we would have found from some of the members we spoke to was that they were really interested in taking part and supporting Pride, but a few of them felt as though it might reflect differently on them when they went back to their home communities. That’s the thing we need to start working on as an organisation.”

“We were started off by Stephen Cullinan as an inclusive organisation – not gender-specific, not religion-specific,” she said. “It was for everyone.”

This holds true today, she added.

“Nothing we do is specific to anyone. Everybody can take part. There is something for everyone in the organisation. It’s not just for farmers, it’s for everyone.”

“We need to make sure that we put our money where our mouth is and respect the people who we are here to support and not let this just be something that we do once a year,” she added. “It has to be something that becomes an inclusive part of how we develop our organisation going forward.”

Ms Gough, meanwhile, is hopeful the organisation can increase its presence at Pride over the coming years.

“We’ve made the first step. Once you have the first step made, people can see how fun and enjoyable the event is, and how anybody can take part. Next year will be bigger and better.”