Environmental watchdog will order six EVs worth €250,000 to ‘green’ its fleet 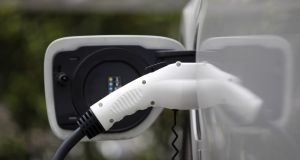 ‘The EPA’s charging infrastructure and the availability of long-range electric vehicles is now making it possible to take these longer journeys.’ Photograph: Brent Lewin/Bloomberg

The State’s environmental watchdog, most of whose vehicles are diesel-fuelled, it to buy its first electric car later this year.

The Environmental Protection Agency, which is responsible for overseeing greenhouse gas emissions and which vowed to make its fleet green almost three years ago, has put out a tender worth €250,000 for six electric vehicles.

It initially expects to buy a “fully electric van” in the autumn, to replace a 1997 diesel vehicle, as well as an electric car to be pooled among staff travelling to meetings and between its offices.

“The EPA’s charging infrastructure and the availability of long-range electric vehicles is now making it possible to take these longer journeys,” a spokeswoman said.

Last year, documents released under Freedom of Information revealed that the agency owns 32 vehicles, of which 26 – or just over 80 per cent – are solely run on diesel.

Since 2015, when the Volkswagen emissions scandal heightened concerns about the fuel’s impact on the environment, the agency has bought six diesel vehicles.

The EPA continued to purchase diesel vehicles last year, with a Toyota Landcrusier bought at a cost of €44,600. A diesel-run Ford Transit was bought in 2016 for use in maintaining “air-quality instruments” and “air-monitoring sites” countrywide.

The agency – which says it is “at the front line” of environmental policing – has been warning the public for years about diesel’s role in the creation of greenhouse gases behind climate change. It has also blamed the fuel for pollutants that cause heart attacks and lung disease.

In its first tender for electric vehicles, it is seeking to buy three passenger cars and three vans over the next three years. It expects to strike a deal with a supplier by September, at which stage “it is our intention to immediately submit an order”.

The EPA says it has a key role to play as an “environmental champion” for the country and is working to “minimise the environmental impact of our own activities”.

A vehicle management policy agreed in 2016 included “a specific commitment to decarbonise” its transport fleet where greener vehicles are “available and suitable”.

But it says that it will not always be possible to replace fossil-fuel vehicles with low-emission alternatives because of the technical requirements and terrain some vehicles travel on.

“Since 2016 we have bought 11 vehicles – five of which are new plug-in hybrids,” said an EPA spokeswoman. “The reason for the six diesel vehicles is that we require four-wheel drive vehicles to access rough terrain for environmental monitoring, site visits and some inspections.

“The cargo vans are also used for environmental monitoring and transport of heavy equipment. Hybrids or electric vehicles were not suitable for these purposes.

“As part of our policy we now have electric charging points at each of our EPA office locations.”

After agriculture, transport is the biggest contributor to overall carbon emissions in the State.

The EPA warned in 2016 that diesel cars represented “the largest source of greenhouse gas emissions” from transport in Ireland, with “negative implications for air quality due to the higher nitrous NOx emissions produced than from equivalent petrol-fuelled cars”.

The previous year, it blamed diesel cars as “a key source” of particulate pollution with “significant human health impacts” that include cardiovascular disease, lung disease and heart attacks.