ESB among final bidders for wind farm off the Wicklow coast

Overseas players will also compete for 1,100MW project which has not been constructed 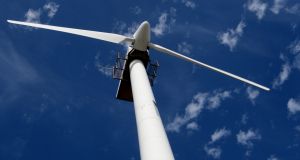 ESB is among the final bidders for a wind farm project off the Wicklow coast which could ultimately have a value of up to €2 billion, The Irish Times has learned.

The Codling Bank wind farm is owned by a joint venture between Norwegian company Fred OIsen and a company linked to property developer Johnny Ronan. Mr Ronan’s former business partner in Treasury Holdings also holds a one-third share of the holding company which controls half the project. Former secretary general at the Department of the Taoiseach, Paddy Teahon, is a director of the holding company.

ESB will face significant competition for the 1,100MW project, which has not yet been constructed, from overseas players. Sources with knowledge of the project said that French multinational utility Engie has also advanced to the next round of bidding, alongside British company EDF Energy and German utility E.on.

Bids are understood to be currently around the €100 million mark, but any successful bidder will have to spend many multiples of that figure to bring the project to completion. They may also face renewed interest from parties that had earlier dropped out of the race and are now understood to be looking to get back in.

The renewed interest in the project, a source said, is driven by the central place afforded to offshore wind farms in the State’s climate action plan.

According to the plan, “the inclusion of specific support for offshore wind in the Renewable Electricity Support Scheme design will be transformative, and in the long run will deliver the scale of renewables required to decarbonise our electricity system’’.

This language has been interpreted by many in the industry as firing the starting gun on an offshore sector which has been neglected for years, with the State targeting subsidies at the less expensive onshore wind sector. Amid the policy vacuum, the Codling Bank project was effectively shelved.

However, in recent years onshore wind projects have found it harder to get planning permission as objections become more frequent, leaving the pace of development in the future in question.

Simultaneously the Government has been under pressure to show its commitment to hitting future renewable energy targets, which may be key in mitigating fines that are expected to come from the European Commission for falling short of binding renewable targets set for next year.

1 Eyewitness to Auschwitz: ‘We were held in the wagons like animals’
2 Chinese virus-hit city of Wuhan closes transport networks
3 Eating out in Dublin – the homeless way
4 Election 2020: 10 key questions to ask candidates on your doorstep
5 Woman’s body most likely dismembered with power tool – murder trial
Real news has value SUBSCRIBE