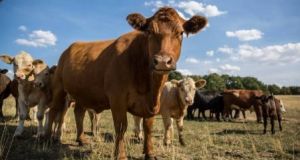 Minister for Agriculture Michael Creed: “The EU-Mercosur trade deal is a very comprehensive trade agreement, but one particular aspect of it, this agreement to allow the Mercosur countries supply 99,000 tonnes of beef into the EU market, is a very significant negative for us.” File photograph: Getty

Minister for Agriculture Michael Creed has refused to rule out Ireland voting against the new EU-Mercosur trade deal at the EU Council of Ministers.

Farmers have expressed concern about the deal, sealed late on Friday, as it would allow 99,000 tonnes of South American beef into the European market annually.

He said that notwithstanding the fact the deal does not allow for the Mercosur countries to start selling the 99,000 tonnes of South American beef into the EU for 10 years, it was still a source of great concern to the Government.

Mr Creed said the deal would remove 28 per cent tariffs on Irish dairy products going into the Mercosur countries, which was to be welcomed, but he said the overall impact could be seriously damaging to the Irish beef industry.

“The EU-Mercosur trade deal is a very comprehensive trade agreement, but one particular aspect of it, this agreement to allow the Mercosur countries supply 99,000 tonnes of beef into the EU market, is a very significant negative for us,” he said.

“We already have a European beef market that’s in marginal oversupply, and given all the uncertainty about Brexit and the UK, where we sell 300,000 tonnes of Irish beef annually, this deal is very disappointing for us.”

The Minister told The Irish Times that it appeared the accord on beef was “the sweetener” to get agreement on the entire trade deal, which also covers cars and car parts, pharmaceuticals and services.

He added, however, that what had been agreed to date was a headline political agreement that had to be turned into a legal document over the next two years which would then have to be voted on by the Council of Ministers, where Ireland could oppose it.

He pointed out that Ireland, through Taoiseach Leo Varadkar, has already joined with France, Belgium and Poland in writing to the European Commission to express concern about the impact of the deal on beef farmers.

Were it to be approved by the Council of Trade Ministers, the deal would still have to make it through the European Parliament and the various national parliaments for approval, he said.

“It would be entirely inappropriate of us now to rule out any option that’s available to us in the approval mechanism, whether it’s voting against it at the Council of Ministers or voting against it ultimately in our national parliament.”

He said the challenge now was for Ireland to build alliances with like-minded countries similarly concerned about the impact.

Mr Creed paid tribute to EU Agriculture Commissioner Phil Hogan, his former Fine Gael colleague, for seeking to mitigate the worst effects of the deal, in which Mercosur countries had originally sought to supply 300,000 tonnes of beef into the EU each year.

However, he said it seemed the deal had been done “with undue haste” by the outgoing European Commission, and believed it would have been far more preferable to defer any deal until it was clear what the upshot of Brexit would be.

Mr Creed dismissed concern that the South American beef will not meet EU quality standards, pointing out the Mercosur countries are already meeting EU standards with the meat they already supply each year to the EU.

Newly elected Fianna Fáil MEP Billy Kelleher said his party would be seeking an emergency Dáil debate on the issue. Mr Creed said he did not foresee any resistance to such a move.

IFA national livestock chairman Angus Woods said the IFA estimated the deal would cost the Irish beef sector €750 million a year in lost revenue, and would have a devastating impact on rural Ireland. He told RTÉ there were at least 11 EU countries opposed to the beef aspect of the deal and the Government should be seeking to form alliances with these countries.

“We in the IFA will fight tooth and nail against this – we don’t accept it is a done deal... the Minister needs to get to Brussels, meet his counterparts and with his fellow agriculture ministers across Europe, and push back against this deal.”