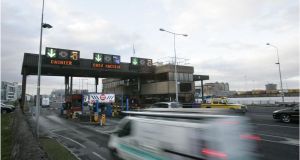 Motorists are overpaying tolls on Ireland’s motorways by hundreds of thousands of euro each year, prompting calls for the cash to be donated to charity.

The companies behind the privately operated tolled motorways have refused to disclose how much in excess coins drivers are tossing into toll booth baskets, but figures released by Dublin Port Tunnel and the capital’s East Link suggest the sums are sizeable.

Dublin Port Tunnel says it amassed €36,000 last year in overpaid tolls from motorists using the express barriers without the exact change, while Dublin City Council, which operates the East Link crossing, said it took in €14,682 in excess coins.

Social Democrats co-leader Catherine Murphy said overpayments, including at the privately operated tolled motorways, would “certainly run into hundreds of thousands of euro every year”.

The Kildare North TD has called on the country’s toll operators to donate the cash to good causes, citing the example of Dublin Bus, which gives fare overpayments to charities and community organisations through the Community Spirit Awards.

“The excess tolls collected by motorway operators is not income they have earned,” she said. “While they don’t have a legal obligation to do anything with it, I think a fair way of dealing with it would be to make charitable donations. It could be a quite sizeable fund.”

Dublin City Council, which has collected more than €46,000 in overpaid tolls at the East Link over the past three years, says the money is “treated the same as other income”.

A spokesman for Dublin Port Tunnel, which has seen its overpaid tolls soar from €20,000 in 2017 to €36,000 last year, said it “obviously proves that time is money for people.

“There is at least one staffed booth 24 hours where drivers can get change, but people are willing to spend some extra cents for their time and breeze on through.”

The excess money is “considered revenue” and goes towards the maintenance and operation of the tunnel, he added. The spokesman attributed the rise in overpayments to increased traffic and economic activity.

Celtic Roads Group, which operates tolls on the M1, M7/M8 and N25 in Waterford, said “in some cases road users pay small amounts over the toll required” and that all cash collected is treated as revenue and subject to VAT and corporation tax.

“There are also road users who fail to pay the required toll. However, thanks to improvements in technology identification of vehicles which fail to pay, the toll is more effective than ever before,” a spokesman added.

Direct Route, which collects tolls at Limerick Tunnel and on the M8 in Cork, said it paid “all appropriate taxes” on all money received.

“We also sponsor local charities in each of our businesses as part of our corporate governance policy,” a spokesman added.

N6 Concessions, which takes tolls on the M6 in Galway, said it collects “very minimal amounts through people overpaying for tolls, especially given that more and more people are either paying with a tag or with their credit card”.

Eurolink, which operates tolls on the M3 and M4, did not immediately respond to queries.

Conor Faughnan, director of consumer affairs for the AA, said motorists were more likely to overpay when tolls are set at an “inconvenient” price.

“You are generally better off with a toll tag, because if you just pay cash on the tolls, you are overcharging yourself anyway. There is a preferential rate with a tag.”

Ms Murphy said traders on main streets countrywide contribute to local fundraising “whether it is the local soccer team or GAA club or whatever, and it is really important in keeping those communities ticking over”.

“But here we have companies who wouldn’t normally be asked to make those kind of contributions, yet they are taking in income that is not earned,” she added. “A generous approach would be for them to use it to distribute it to charities or organise a system where people can apply for some of the money for good causes.”