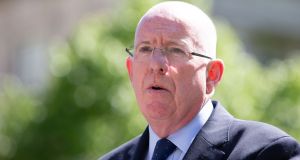 Minister for Justice Charlie Flanagan said several issues arise in seeking to simply outlaw membership of a criminal gang in such a manner. Photograph: Tom Honan

Minister for Justice Charlie Flanagan has ruled out proscribing organised crime gangs like the Kinahan cartel or the Hutch faction.

Proscribing such organisations would allow the Garda to charge gangland figures with an offence of membership.

Under the Offences Against the State Act, paramilitaries can be convicted for being a member of an unlawful organisation – the IRA and its various breakaway groupings – as proscribed by the Government in a number of orders.

Mr Durkan accepted there was some “flexibility” in how organised crime gangs operate “with people coming in and out of them over time”, but said they had a clear organisational structure and hierarchy.

“They don’t operate as individuals but as an organisation, operating criminal activities on a weekly, daily and hourly basis,” he said.

Each gang has a core of about six to 12 leaders who oversee middle managers, who in turn control the low-level criminals who carry out the day-to-day activities, he said.

In response to Mr Durkan, Mr Flanagan said: “From time to time the question arises about providing for an offence of membership of a criminal gang in a manner similar to the approach taken in the Offences Against the State Acts with regard to membership of a proscribed organisation.”

But he said “several issues arise in seeking to simply outlaw membership of a criminal gang in such a manner”.

“Most significant is the fact that a criminal gang is unlikely to have the permanency of organisation and structure that a subversive organisation has traditionally had,” he said.

“Relationships in criminal gangs tend to be more fluid, with shifting memberships and alliances. New splinter groups and new gangs can form overnight.”

Mr Flanagan said the Criminal Justice Act already allows for number of offences targeting organised crime, including participation in and directing a criminal organisation, while the Proceeds of Crime Act gives extra power to seize assets.

“Overall I believe that sufficient legislation already exists for the prosecution of offences relating to organised crime and to target the proceeds of crime,” he said.