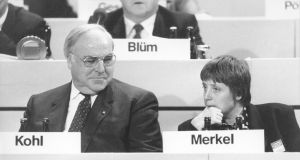 When President Michael D Higgins arrives in Berlin on Tuesday evening for a three-day state visit to Germany, he is marking nine decades of bilateral relations that have been so stable for so long they are often taken for granted.

In 1929, Dan Binchy, the first Irish diplomat recognised by Berlin, described the German view of his homeland as “uninformed sympathy”.

At a recent 90th birthday party to mark those diplomatic ties, the general consensus in Berlin’s Irish Embassy was that German sympathy towards Ireland remains unchanged. But how informed or uninformed this sympathy, so the consensus go, depends largely on Irish engagement with its largest EU partner.

Dr Gisela Holfter, joint director of the University of Limerick’s Centre for German-Irish Studies, described the ties – unique in the EU for being unblemished by conflict – as an “untroubled friendship”.

“But that shouldn’t blind us: there are misunderstandings, good relations are not a given and there is always room for improvement,” said Holfter, whose UL centre co-sponsored the anniversary event.

With her research into bilateral links, Holfter has arguably done the most to bring Germany and Ireland together since Nobel laureate Heinrich Böll.

Six decades after he published the Irisches Tagebuch (Irish Journal), Böll’s Achill Island love story – largely unknown in Ireland – is a major reason why Germans are the third-largest tourist group to Ireland.

Another cultural bridge was on display last month in a full-page advertisement in Der Spiegel magazine: a rugged Irish farmer and grazing cows in a cliff-edge field.

For decades Kerrygold has been selling a wild, windswept, independent Ireland that is deeply compelling to Germans, reflected in how they are our fifth-largest food export market.

When Irish-German bilateral relations began formally in 1929, neither side knew they were at the mid-point between one horrendous world war and another, triggered by a fascist dictator just four years away from power in Berlin.

Dr Michael Kennedy, in his embassy lecture last month, noted how Binchy, the first official Irish diplomat in Berlin, viewed the Nazi leader: “There are two barriers to megalomania in public life: intelligence or sense of humour. I consider Hitler to lack both.”

The subsequent years – the two post-war German states in 1949 and the fall of the Berlin Wall 40 years later – will all feature in Higgins’s busy schedule. In a keynote address in Leipzig, where Germans first marched against East German repression, he will warn that our continent’s relative stability is anything but a given.

Europe is facing unprecedented challenges – on migration, climate, terrorism, Brexit and the rise of populist nationalism. But, as Higgins has warned in a series of speeches, the appetite of Europeans to face these challenges together hinges on an EU that exists for citizens and not markets.

Germany has seen a steady arrival of Irish, from United Irishmen who fled to Hamburg after 1798 to Roger Casement’s mad-cap German mission in 1916 to acquire guns and an Irish brigade to fight British rule.

The consistent pattern of Irish emigration to Germany is of black sheep anxious to do their own thing. Today’s Irish who lose their heads to the charms of Berlin, Munich or Hamburg are unwittingly travelling in the footsteps of St Cillian.

The Cavan-born religious man’s European mission ended in 689 when an angry local noblewoman in Würzburg, in Bavaria’s northern Franconia region, had him beheaded.

The Cavan-born religious man’s European mission ended in 689 when an angry local noblewoman in Würzburg, in Bavaria’s northern Franconia region, had him beheaded

Today he is the name-giver for the annual Killianfest, bringing together Würzburg locals with visitors from Cavan and Wicklow. And the saint’s bible – with the world’s oldest written Irish in the margins – is a must-see this week for our Gaelgoír head of state.

In 1929, some 1240 years after Ireland’s first diplomatic farrago, Dan Binchy echoed Cillian’s missionary zeal with his vow to “bring light unto the Germans” – a people previously unaware they had been living in the dark.

He soon realised the challenge of the post, caught between a host country that viewed Ireland “as it thinks, say, of Bulgaria or a small Central American republic” and Dublin’s consistent over-estimation of Berlin’s interest in Irish affairs.

Even after two World Wars, when Germany craved international rehabilitation, the desire for friendship with Dublin was always trumped by the necessity of good relations with London.

Last week’s appointment of Nicholas O’Brien as Ambassador to Berlin continues a tradition of men leading diplomatic efforts in Germany.

But the roots of Irish diplomacy here were laid in 1921 by Nancy Wyse-Power, whose twice-weekly Irish Bulletin informed Germans of the complicated situation in Ireland.

Of two low points in Irish-German relations, the first was Charles Bewley, characterised by his December 9th, 1938, report after the previous month’s Nazi-organised violence against Jews. Instead of telling Dublin about burning synagogues and looted Jewish stores, he argued that “special measures taken against the Jewish community” were justified because of German Jews’ “demoralising influence” on the wider population.

The second low point came on November 22nd, 1943, when his successor, William Warnock, witnessed the destruction of the Irish legation on Berlin’s Drakestrasse in a “sea of flames and blinding smoke”.

Post-war wariness between Bonn and Dublin was made up for by considerable two-way traffic of people: massive German business investment in Ireland and Irish emigration to work in German factories, on building sites and to play music in pubs and concert halls.

There was massive German business investment in Ireland and Irish emigration to work in German factories, on building sites and to play music in pubs and concert halls

At the Berlin 90th anniversary event, Dr Mervyn O’Driscoll, head of history at UCC, argued the high-point to date of Irish-German relations was 1990, when the Irish EU presidency assisted Helmut Kohl’s push for European acceptance of German unity.

The years since, he argued, have seen Ireland’s embrace of EU integration, in particular the euro, in tension with Dublin’s pursuit of an Anglo-American economic model based on technology and pharmaceutical foreign direct investment.

The latter has left Ireland “exposed” in the era of Trump and Brexit, he claimed, and underlined the urgency of Ireland pursuing closer ties with Germany.

“Our fates,” he said, “are more intertwined than at any time in our history.”