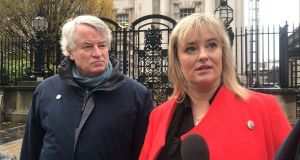 The Northern Ireland Human Rights Commission has settled a case against the Northern Ireland Office (NIO) on behalf of former SDLP councillor Máiría Cahill. The action led to a change in the law requiring the publication of election candidates’ home addresses.

The commission made the challenge on behalf of Ms Cahill, who pulled out of the North’s local government elections in 2019 over fears for her safety. An amendment to the law, which came into force in July, allows candidates to choose not to have their address made public.

The commission said it settled the case without any admission of liability from the NIO, which is responsible for electoral law in Northern Ireland. An unspecified amount was paid to Ms Cahill in compensation.

Chief Commissioner Les Allamby said Ms Cahill had “paved the way to protect the human rights of anyone who may have faced similar circumstances in the future”.

Ms Cahill - who had been co-opted onto Lisburn and Castlereagh City Council in 2018 - had intended to stand for re-election but said she was unable to do so because of the legal requirement to publish her home address. She has an indefinite restraining order in place in order to protect her from an individual, and publishing her address would have put her at risk.

Ms Cahill was also unable to stand in the European Parliament elections in 2019 because she would have had to publish her home address.

At a court hearing last February, Ms Cahill argued that the law was in violation of her rights under the European Convention on Human Rights and the Charter of Fundamental Rights of the European Union.

Mr Allamby said the previous election law had put people at risk, including victims of domestic violence, by forcing them to publish their address.

“It was unacceptable to expect anyone to jeopardise their safety to run for public office,” he said. “The commission welcomes the decision to change the law, settle this case and pay compensation, given that Máiría lost the opportunity to stand as a candidate in local elections.”

Ms Cahill thanked the commission and all those who supported her in taking the case. She said it was “frustrating that this settlement did not come much sooner in the process, which would have saved time, effort and public money”, she was nevertheless “glad that nobody else will now be put in the position that I was”.