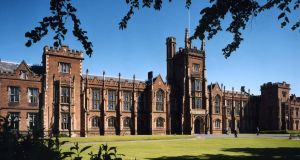 A report into more than a dozen mother and baby homes and Magdalene laundries in the North is expected to raise questions around infant mortality rates and adoption practices when it is published on Tuesday.

Researchers from Queen’s and Ulster universities examined the workings of homes run by both Catholic and Protestant churches and religious organisations between 1922 and 1999, where according to Amnesty International about 7,500 women and girls gave birth.

Speaking ahead of its publication, the organisation’s programme director, Patrick Corrigan, said the 500-page report would “shed new light on the appalling extent and vast scale of the suffering experienced by generations of women and girls in these institutions”.

Amnesty International, which is supporting former residents of the homes in their campaign for a public inquiry, on Monday night called on Arlene Foster and Michelle O’Neill to meet them in person.

“The First and deputy First Minister must now meet with survivors, so that the Executive can start to address the irreparable damage done to so many young lives.”

It is understood a number of victims and survivors who were part of the Inter-Departmental Working Group (IDWG) – which was established by the North’s Department of Health and Executive Office to take forward the research – received confidential copies of the report on Monday.

It is due to be discussed by Ministers on Tuesday morning ahead of a statement in the Assembly by the First and Deputy First Ministers.

The Working Group is expected to make a number of recommendations to the Executive based on the research.

Earlier this month the independent chair of the Working Group, the former PSNI Deputy Chief Constable Judith Gillespie, told the BBC the report had revealed themes similar to those found in the report published by the Commission of Investigation into Mother and Baby Homes in the Republic.

The Department of Health in the North commissioned the research in 2017 to address the limited available evidence about the operation of mother and baby homes and Magdalene laundries in Northern Ireland.

It investigated institutions run by the Good Shepherd Sisters in Belfast, Derry and Newry, as well as mother and baby homes in Belfast run by Mater Dei, the Belfast Midnight Mission, the Salvation Army and other hostels.

Their research was based on a review of the archived records and secondary documentation relating to the institutions, as well as oral testimony from former residents or workers, their wider families and others with experience of – or who provided services to – the homes or laundries.

Researchers were also asked to identify and report on the nature and extent of any state involvement in relation to the operation of each institution.