Lyra McKee killing is unlikely to lead to Stormont breakthrough 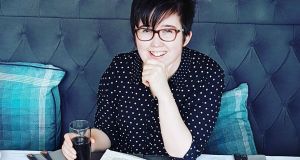 The British and Irish governments are doubtful that negotiations to get Stormont back into operation can be brought quickly to life, despite public outrage about the death of journalist Lyra McKee who will be buried in Belfast on Wednesday.

Tánaiste and Minister for Foreign Affairs Simon Coveney held meetings in Belfast and Derry on Tuesday with political leaders, while Northern Secretary Karen Bradley is due to do so later this week.

“Our clear and overriding objective must be the restoration of all the political institutions established by the Belfast Agreement,” said Ms Bradley, who will hold talks with Mr Coveney in Belfast later on Wednesday.

Meanwhile, President Michael D Higgins and Taoiseach Leo Varadkar will be among the congregation in Belfast for the funeral service of Lyra McKee.

Following her death, SDLP leader Colum Eastwood wrote to Mr Varadkar and British prime minister Theresa May saying there was “an unmistakable public desire that her tragic and terrible loss” would spark a turning point in the peace process.

Despite this call and despite the outpouring of public sympathy and the frustration with Stormont’s continuing political stalemate, senior Irish Government sources were not optimistic of any imminent breakthrough that would allow the Stormont institutions to be relaunched.

Mr Coveney was seeking to “take the temperature”, sources said, but ongoing contacts with the northern parties have not generated much hope in Dublin that the grounds to restart talks currently exist.

Neither Dublin nor London wants to push the parties into talks unless they are reasonably confident they can reach a deal. Currently, the sides are some distance away from that point, said an Irish source.

There are local elections in the North next week and European elections three weeks later, assuming the UK remains in the EU, all of which mitigate against any attempts at a compromise which would restart the institutions.

After that, sources say that the prospect of the conclusion of the inquiry into the renewable heat incentive scheme – which collapsed the powersharing government more than two years ago – will be a complicating factor.

“I can’t see anything happening in the short term anyway,” said one Government source.

Mr Eastwood, who met Mr Coveney in Derry on Tuesday night, acknowledged the difficulties but said this was a moment that politicians should seize to try to break the political logjam.

Wednesday’s funeral service will be led by the dean of St Anne’s, Very Reverend Stephen Forde, with the parish priest of St John’s in west Belfast, Fr Martin Magill, delivering the homily.

Ms McKee’s family had requested that the funeral service be held in St Anne’s Cathedral because it was a “shared space” that was reflective of her views and personal philosophy.

The family also requested that Fr Magill be involved in the service as he was their priest when he served in the Sacred Heart parish in north Belfast where the McKees live.

One of her friends, Kathleen Bradley, said the funeral would be a “celebration” of Ms McKee’s life.

As she was a devotee of JK Rowling’s books, Ms Bradley said that some mourners would be expected to turn up in Harry Potter-themed clothes or as characters from the Marvel comics, of which she also was a fan.

On Tuesday, the New IRA formally admitted what was generally known, that it carried out the shooting. Meanwhile, a 57-year-old woman arrested on Tuesday morning by detectives investigating the murder was released unconditionally later in the day.