Committee says message to local and European candidates had been ‘misunderstood’ 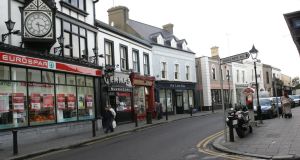 The Dalkey Tidy Towns committee has said it will “remove and destroy” any election posters put up in the south Co Dublin suburb.

The message to political candidates from the group comes ahead of the local and European elections next month.

Candidates are advised “not to erect wasteful plastic posters in Dalkey,” and any election posters placed on poles would be “removed and destroyed ASAP,” the message says.

The email includes a map outlining the Dalkey boundary, with a warning that any election posters found inside would be removed.

“We are serious about our battle against single-use plastic, help save the environment,” the message from the Dalkey Tidy Towns committee said.

However, Des Burke-Kennedy, a Dalkey Tidy Towns committee member, said the message to candidates had been “misunderstood”.

The email had not been intended to suggest posters put up in Dalkey would be removed during the campaign, only afterwards if they had not already been taken down, he said.

If candidates did erect posters in the locality during the campaign, the group would contact them to ask if they would consider removing the posters, Mr Burke-Kennedy said.

Election posters, as single-use plastics, were “out of sync with the world right now,” he said.

A spokesman for An Garda Síochána said if an individual makes a complaint about the theft or damage of their property, such as an election poster, “the matter will be fully investigated”.

Posters can only be erected 30 days before polling day on May 24th meaning candidates will begin to put them up from Wednesday.

Posters must be removed seven days after the election, or candidates are liable to face a €150 fine, enforced by each local authority.

There are restrictions around election postering, and they cannot be placed too close to the ground on poles, or on electricity poles for safety reasons.

“Posters are an integral part of electioneering … I don’t think banning them is the right way to go,” he said.

Dave O’Keefe, a People Before Profit councillor in the area, said his party would be “absolutely adhering” to the Tidy Town group’s request.

“Posters have seen their day, I hope this will be the last election where we have them,” he said. He added candidates would be “snookering themselves” by not putting up posters where others were.

Inspections for the Tidy Towns competition usually take place between May and June each year.

Over 160 towns and areas have signed up to Poster Free, a campaign which calls on candidates to avoid erecting posters in given areas.

David Weitbrecht of Poster Free, said the campaign “does not promote any illegal behaviour,” when asked about the suggested removal of election posters.