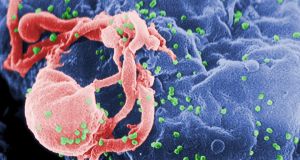 PrEP is effective and currently available but at a high cost

The State health watchdog has concluded a drug which helps prevent HIV would be “safe, effective and cost-saving” if provided by the public health service in Ireland.

The Health Information and Quality Authority (Hiqa) was asked to assess the cost of introducing a national scheme to provide the drug, PrEP, which is currently available but at a high cost.

In a draft report, Hiqa said PrEP had been found to be “highly effective” in preventing HIV acquisition among gay and bisexual men, with a risk reduction of 75 per cent across all medical trials.

Based on an economic analysis, introducing a national PrEP programme would be cost saving for the health service in as little as eight years.

Rates of HIV in Ireland have increased in recent years, with 492 new diagnoses recorded in 2017, just over half of which related to gay or bisexual men. During the same year, 11 people died from AIDS or HIV, according to Central Statistics Office data.

Currently 12 countries offer PrEP through the public health service, with France the first to do so in 2015.

The Hiqa assessment found while individuals in Ireland can be prescribed PrEP, they must pay out of pocket for the treatment.

“This raises concerns regarding potential inequity in that access to PrEP is limited to those who can afford to pay,” the report said.

In studies of the drug’s effectiveness among men who have sex with men, and those who inject drugs using needles, the annual cost of the drug ranged from €232 to €14,659 per person, with €6,543 the average cost.

On Tuesday Hiqa announced it was opening a public consultation on its draft report, ahead of its recommendation to Minister for Health Simon Harris and the Health Service Executive (HSE) on the drug.

Commenting on Hiqa’s draft assessment, Taoiseach Leo Varadkar said the report “not only confirms that PrEP can help to prevent HIV amongst those who are high risk, it also shows how a PrEP programme could save money.

“The introduction of a PrEP programme, coupled with increased testing and greater awareness will help us to reduce the number of people contracting HIV,” he said.

Mr Harris said reducing the rising rates of HIV infection was a “priority focus” for the health service.

“Considerable work is already underway in the HSE to prepare for the introduction of a PrEP programme that meets appropriate standards,” following receipt of Hiqa’s formal advice on the drug, he said.

The public consultation on the draft Hiqa assessment is open until 28th May, following which Hiqa will send a final report to Mr Harris, on whether or not to fund a public programme for the treatment.