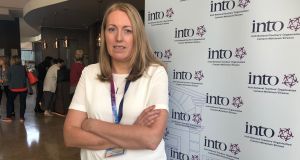 Josephine Byrne, a primary teacher in Edenderry, says leave should be available for anyone who suffers a miscarriage. Photograph: Carl O’Brien

Primary school teachers are calling for leave to be available to them if they suffer a miscarriage.

Reproductive-health related issues such as miscarriages, ectopic pregnancies and fertility treatment are not included under the current sick leave scheme for public sector workers.

Josephine Byrne, a teacher based in Edenderry, Co Offaly said she felt compelled to go back to work after a miscarriage despite feeling “broken”.

“In the middle of June our world came crashing down around us. I was 10 weeks pregnant when I started to bleed. A trip to the early pregnancy unit in Ballinasloe confirmed our worst fears: the baby had stopped developing at seven weeks and I’d had what is termed a missed miscarriage,” she said.

She was among teachers to tell their highly-personal stories on reproductive health at the Irish National Teachers’ Organisation’s (INTO) annual congress in Galway.

Ms Byrne said she received a very sympathetic response from her principal who was “beyond supportive” and urged her to take as much time off as she needed.

However, after being at home for a few days waiting for things to progress, she began to worry about using up her sick leave.

This was because pregnancy-related sick certificates can currently only be issued by GPs for issues arising in later pregnancy.

“Instead of minding myself and grieving with my husband over our lost child, I was stressing about using up all of my sick leave,” she said.

After she underwent a hospital procedure on a Friday, she returned to work the following Monday.

“At the time we were living an hour away from school and I cried the whole hour-long journey from Edenderry. I wasn’t ready to go back to school. I was broken.”

While Ms Byrne became pregnant again, she found out she had a second miscarriage at the end of the following August.

“I was devastated and barely functioning but guess what I did on September 1st? Yes, I went to school. Why did I do that? Because I was worried about using up even more sick leave. The worry and stress over sick leave was like a noose around my neck at the time,” she said.

“Fertility treatment, scans for possible difficulties, difficulties with IVF should all be covered,”she said.

“A lot of teachers still feel slightly uncomfortable about speaking to a principal about such issues,” she said, and a certificate would “respect this privacy”.

At the union’s annual congress on Tuesday, members backed a motion calling for statutory time off work for reproductive health matters.

It is first public service union to seek such statutory leave for reproductive health matters.

Ms Byrne said that she had subsequently become pregnant, and gave birth to twins six months ago.

“I know that I am now one of the lucky ones. We need to support others to end the stress that many of our colleagues go through when using sick leave for reproductive health matters,” she said.

She said IVF was only going to become a “bigger issue”, and she welcomed the fact that the INTO had “opened up the conversation on this”.