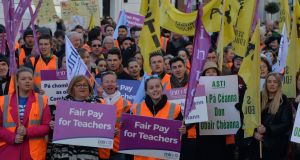 The latest initiative to address lower-pay arrangements for public service staff taken on since 2011 marks the third time the Government has attempted to tackle this long-running controversy.

Last September it announced a €200 million plan that aimed to finally eliminate the two-tier pay system in the public service by 2026.

There had also been an earlier initiative put in place by the then minister for education Richard Bruton that sought to move some of the way to closing the pay gap between more recently employed teachers and their longer-serving colleagues.

Minister for Public Expenditure Paschal Donohoe in September said this proposal represented an affordable way of dealing with the issue, which is a source of industrial relations strife, and stressed that he would not be going any further.

However, the teaching unions were not satisfied and argued that the measures would not fully deal with cases where some people being paid less than their colleagues for doing the same work because they were hired at a different time.

Both the INTO and the ASTI rejected the proposals, but neither has balloted for industrial action. They instead engaged in high-level discussions both with the Department of Education and the group overseeing the public service agreement – a €900 million deal due to run until the end of next year.

Now, on the eve of the teacher unions’ Easter conferences, a deal has been brokered that will see outstanding matters of concern arising from last September’s deal addressed as part of any new pay review mechanism agreed by the parties or in the next round of pay talks.

The two-tier pay systems dates back to measures put in place to tackle the collapse of the public finances a decade ago. The then government reduced pay rates for new entrants across the public service by 10 per cent in addition to scrapping allowances.

The move particularly affects teachers, as they continued to be recruited while a moratorium was in place almost everywhere else. However, as soon as public service recruitment resumed in earnest from 2014, the scale of the problem of the two-tier pay system also increased steadily.

A Government report published in March last year showed just how big the issue had become.

The official response to the concerns involved recent entrants to the public service catching up with longer-serving colleagues over time by being permitted to jump some points on their existing incremental pay scales.

However, the Government ruled out, for example, a reintroduction of allowances that were also abolished for public service personnel appointed after 2011 or any payment of back money. It had forecast that about 35,000 staff across the public service would benefit next year.

The public service employs more than 300,000 staff in total, including civil servants, healthcare staff, local authority workers, gardaí and Defence Forces personnel as well as those in the education system.

The aforementioned report estimated that in March last year, some 60,000 personnel across the public service were affected by the lower pay rates. This included more than 16,000 teachers, nearly 5,000 special needs assistants and almost 10,000 nurses.

The numbers, and the cost of ending the two-tier system, will undoubtedly have increased since then.