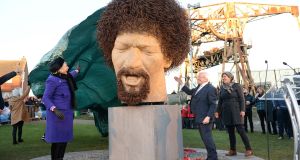 The Luke Kelly statue that sits at the corner of Guild Street and Sheriff Street at the mouth of the Royal Canal in Dublin has been vandalised for a seventh time.

In a statement released on Sunday, the North Wall Community Association has said it was “frustrating” but “not unexpected” that the statue had been defaced with graffiti again. The group said the sculpture should “not be moved but protected” and said it had called for the plinth that sits underneath the sculpture to be raised. The association has also requested the installation of a “5ft black spiked railing” around the statue.

“We are calling for the powers that be to immediately protect Luke’s statue or the eighth incident will surely happen”.

The association also issued an apology to the Kelly family for the “hurt and distress these incidents must be causing them”. “We are very proud of the fact that Luke was born and raised in North Wall, and ask that these terrible attacks stop and that this mindless stupidity is ended once and for all”.

The Guild Street statue was daubed with paint for a sixth time in June, while a second statue of Kelly, which sits beside St Stephen’s Green shopping centre, was also vandalised with paint.

The statues were erected in January 2019 following a long campaign to pay tribute to the late Dubliners singer.

Ruairí Ó Cuív, public art manager with Dublin City Council, said in April that the sculpture, by artist Vera Klute, had been located in North Wall for very specific reasons.

“This was the community where Luke was born, and from the very beginning I was wholeheartedly in favour of locating the statue in this community. Better-off parts of the city have plenty of statues. Our ambition in the arts office is to bring culture right throughout the city.”

Klute had also specified that the work should be located along the canal, he said.

The council said in April, when the statue was vandalised for a fourth time, that it was considering “all options” to protect the sculpture.