Aircraft in crash landing was on way to Roscommon charity event 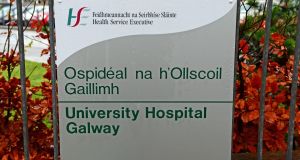 One of the injured people was airlifted and the other taken by ambulance to University Hospital Galway, where they are being treated. Photograph: Eric Luke

The light aircraft that crash-landed in a field in Galway at the weekend had taken off from Cork that morning on its way to a charity function in Roscommon.

Two people, a man and a woman, suffered injuries when the Cessna aircraft came down in a field close to Killimordaly GAA club in Co Galway at lunchtime on Saturday.

The pair, both aged in their 60s, were taken to University Hospital Galway where they are being treated for their injuries. One was airlifted from the crash site and the other taken by ambulance.

They had taken off from Rathcoole Aerodrome in Cork on Saturday morning to travel to Roscommon where the Tibohine Flying Club near Frenchpark were staging a “fly-in” to raise funds from Mayo Roscommon Hospice.

Three inspectors from the Air Accident Investigation Unit attended the crash site on Saturday afternoon and the aircraft, which suffered considerable damage to the front, has been taken to their wreckage facility at Gormanstown in Co Meath.

Fire crews from Athenry and Loughrea were among the emergency services that went to the scene and they doused the aircraft in foam.

A Garda investigation has also been launched.

The pilot of the Cessna had been in regular contact with air traffic control, confirming their location over Loughrea and also their estimated time of arrival in Roscommon shortly before contact was lost.

The alarm was raised when the aircraft came down in a field a short distance from a road in Killimordaly and emergency services were quickly on the scene.