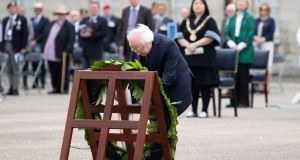 Ceremonies were held on Sunday in several locations across the country to mark a National Day of Commemoration for Irish men and women who have died in past wars, or on duty with the United Nations.

In Dublin, President Michael D Higgins laid a wreath at a ceremony at Collins Barracks, which was also attended by political and religious leaders, as well as representatives of the humanist society of Ireland.

Many members of the Cabinet attended, as did religious and military leaders, and veterans of several conflicts, and retired members of the Defence Forces and several other armed forces from around the world.

Representatives of the next of kin of those who died, as well as relatives of the 1916 leaders, were invited to the event, which featured an Air Corps flypast, and music from the Band 2 Brigade of the Defence Forces, who accompanied the soloist Colette Delahunt.

Chief Justice Frank Clarke was in attendance, as was former president Mary Robinson.

Leading the ceremony, Taoiseach Micheál Martin said it was “fitting” that the Irish men and women who died in such conflicts or with the UN were commemorated. Prayers and reflections were offered by the religious and humanist leaders during an inter-faith ceremony.

Commemoration ceremonies were also held in Cork, Galway, Kilkenny, Limerick and Waterford. Due to the coronavirus crisis, and in order to comply with public health guidelines, the ceremonies were not open to the public.