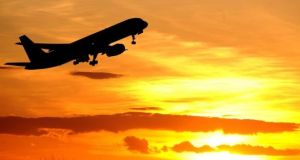 There is growing concern about the number of flights arriving in Ireland from the US, where the pandemic is accelerating. Photograph: Owen Humphreys/PA Wire

Some high-profile figures and US tourists who violated quarantine rules should be jailed to send out a clear message that the State is serious about enforcing laws designed to stop people arriving in Ireland spreading the Covid-19 virus, an infectious disease specialist has suggested.

Amid growing concern about the number of flights arriving in Ireland from the US where the pandemic is accelerating, Prof Sam McConkey, an infectious disease specialist and head of the department of international health and tropical Medicine at the Royal College of Surgeons in Ireland, said compliance with the 14-day quarantine rules would be greatly helped by increased enforcement of the existing regulations.

His comments came as Taoiseach Micheál Martin said the Government remained cautious about international travel as it sought to ease restrictions in Ireland to allow society to reopen.

Prof McConkey said the Fianna Fáil MEP Billy Kelleher had publicly admitted that he had ignored the rules on quarantining when he returned to Ireland from Brussels earlier this month to attend a special sitting of the Dáil in the National Convention Centre to elect his party leader, Mr Martin, as Taoiseach.

The specialist said it also seemed there was a lack of enforcement of the rules governing all people arriving here from abroad.

“We don’t need new regulations. We just need to enforce the ones that are already there,” Prof McConkey said.

“If Billy Kelleher and a group of American tourists were to be sent to prison in Mountjoy for three months it would send out a clear message that we have law and order, and that the justice system applies equally to everyone. It would change everything dramatically.”

Offenders face a potential jail term of up to six months and/or a maximum fine of €2,500.

However, Prof McConkey said his preference would be for visitors to be persuaded voluntarily to comply with regulations without the need for measures like prison or dedicated quarantine centres.

He said the Fianna Fáil MEP was an experienced politician who should know the law, while there was an onus on everyone engaging in foreign travel to familiarise themselves with the rules of their country of destination.

At the same time, Prof McConkey said he was opposed to a blanket ban on all travel to Ireland from countries like the US.

“We are an island with a small open economy, and we should keep it open as much as possible. Any restrictions should be more nuanced.”

US travellers are currently prevented from visiting most European countries including all EU member states except Ireland, unless they qualify for an exception.

However, they are allowed to travel to the UK and Ireland, which are outside the Schengen area for free movement.

“I’ve been watching with a fair amount of horror the growing number of Covid-19 cases across 38 US states,” said Prof McConkey. “It is going to have catastrophic consequences for the health services of places like Florida and Arizona where they have high proportions of elderly people”.

Meanwhile, a Co Clare company which offers guide tours and electric bikes for hire said it had cancelled a booking after discovering it had been made by a small group of US tourists who were unaware of their need to quarantine for 14 days.

Janet Cavanagh, who owns E-Whizz bike rental company based in Kilfenora, expressed shock that the visitors who had recently arrived in Ireland from Minneapolis and were staying in Airbnb accommodation in Co Meath did not realise they should not be visiting places unless they had completed the required period of quarantine.

“I know we are in tourism but I’m just not willing to risk it for staff and other guests. These people are in the country and socialising,” said Ms Cavanagh.

The businesswoman said her company was highly dependent on US visitors for revenue, but had assumed there would be no tourists from America this year.

“Although they said they had filled out the contact forms at Dublin Airport, it is worrying that people do not seem to be checking that they are following the quarantine requirements,” Ms Cavanagh said.

Various social media platforms in recent days have also highlighted reports of groups of US tourists being seen in a number of locations around Ireland, including Killarney and the Bray-Greystones cliff walk.