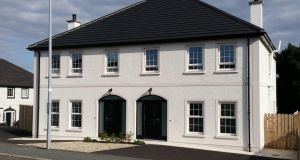 A Co Donegal football club struggling to cope since its facilities were damaged by floods three years ago is raffling off a house in the seaside town of Buncrana to raise funds.

The Cockhill Celtic club in Buncrana, which celebrates its 50th anniversary this year, has launched its Win a House for €100 campaign to raise money to rebuild and upgrade the club’s facilities.

The winner of the raffle will walk away with keys to a house in Donegal worth €179,000.

Cockhill Celtic lost one of its two pitches in August 2017, when a catastrophic series of thunderstorms hit Donegal, dumping a month’s worth of rainfall on the county in just a few hours.

Club chairman Dermot O’Donnell said members had struggled to train with the reduced facilities since 2017, but he hoped the raffle, which will be held in December, could help it “rebuild and go from strength to strength”.

Youth membership of the club has doubled in recent years with “triple the number of girls” now playing football, while the club has won seven consecutive Ulster senior league titles, said a statement from the club.

The Buncrana club teamed up with the Inishowen Aileach football club to gather together a prize fund worth over €200,000 which includes the four-bedroom semi-detached house in Gleann Aoibhinn in the Clonbeg area of Buncrana.

Other prizes include an all-inclusive Mediterranean cruise or the cash equivalent of €2,500.

Aileach football club chairman Stephen O’Donnell said a decision had been made to limit the draw to only 4,000 tickets so that the odds would not be heavily stacked against participants.

“We believe that a 4,000 to 1 shot to change your life forever is a punt worth taking,” said Mr O’Donnell.