FSAI found accumulation of sewage and wastewater in basement of restaurant 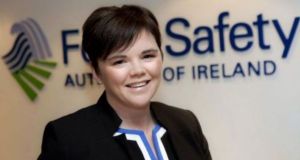 Dr Pamela Byrne, chief executive of FSAI, said it is ‘disconcerting’ that the authority needs to take enforcement action for pest control issues.

A Boojum burrito bar in Co Limerick was ordered to close last month after inspectors found a build up of sewage and wastewater in the basement.

The Food Safety Authority of Ireland (FSAI) issued a closure order for the entire restaurant on Patrick Street in Co Limerick on September 18th. The order was lifted four days later.

The enforcement notice stated there was an “accumulation of sewage and wastewater in the basement accompanied by a strong malodour”.

The FSAI said it was necessary for “an adequate number” of flush lavatories to be available, and they must be connected “to an effective drainage system”.

Separately, New World, a Chinese takeaway in Dundalk, Co Louth, was served a closure notice for its food storage area due to evidence of rodent activity.

The inspector said a “grave and immediate danger was found due to a failure to comply” with hygiene regulations.

“Evidence of rodent activity was found in the food storage room in the rear yard, posing a risk of contamination to food. Rodents transmit pathogens through faeces and urine, which may lead to a serious risk to public health,” the closure order said.

The order was served on September 29th but was lifted on October 10th.

Zaika Food, a wholesaler in Co Cork, was prosecuted under the labelling of beef and beef products regulations and received a fine of €500, while Hoi Wun Chinese takeaway in Finglas was served a prosecution under European food law.

Mr Chris Ling, owner of the takeaway, pleaded guilty, and the Probation Act was applied, with a donation to charity of €100.

Dr Pamela Byrne, chief executive of FSAI, said it is “disconcerting” that the authority needs to take enforcement action for pest control issues.

“ While the number of closure orders was low in September, it was disappointing to see another month with orders relating to the presence or evidence of rodents in food premises,” she said.

She added that sewage system failures should “sound alarm bells for food businesses”.

“It is simply unacceptable for a food business to continue to operate when their sewage/wastewater systems have issues,” she said.

“Food business owners are responsible for ensuring best practices in relation to food handling and food storage in their business. Failure to do this puts their customers at risk.”