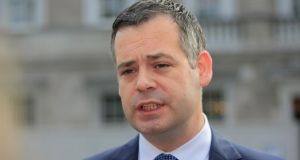 Mr Doherty criticised the lack of details around the size of the proposed fund, which he said would likely be leaked to the media in the coming days. File photograph: Gareth Chaney/ Collins

The lack of information on the size of a Covid-19 recovery fund to be announced in next week’s Budget showed a “disrespect” for the Oireachtas budgetary oversight committee, Sinn Féin TD Pearse Doherty has said.

Minister for Public Expenditure Michael McGrath said “no final decision had been made” on the scale of the fund to stimulate the economy in the ongoing fallout of the coronavirus.

Mr Doherty criticised the lack of details around the size of the proposed fund, which he said would likely be leaked to the media in the coming days.

The committee was questioning Mr McGrath ahead of Budget 2021, which will be announced on Tuesday, 13th October.

“Why won’t you provide the budgetary oversight committee with the parameters of what you’re looking at. Not the exact figure, but an indication of whether the recovery fund is half a billion euro, or €5 billion,” Mr Doherty said.

Mr Doherty said the Minister would be pulling a “bunny out of the hat” on Tuesday, despite criticising the same practice while in opposition as Fianna Fáil’s finance spokesman.

“You should be more forthcoming in terms of what you are thinking about in the recovery fund,” the Sinn Féin TD said.

“You’re deliberately keeping that information from us today, not down to the cent, but to give us a parameter, are we looking at … €10 billion, or €5 billion, or something more modest,” he said.

“The truth is no final decisions have been made at this point in time,” Mr McGrath said. He added that Minister for Finance Paschal Donohoe was examining taxation options, which could impact on the amount of funds available.

Budget 2021 would include around €9 billion for coronavirus-related spending next year, separate to the recovery fund, the committee heard.

“As we continue to live with the virus and manage any resurgences through 2021, the funding required for our health service and for income and employment supports will remain significant next year,” he said.

The amount the Government would have to spend responding to Covid-19 next year was “subject to a lot of uncertainty,” Mr McGrath said. “We are going to have a very large deficit in 2020, somewhere of the order of the mid-20s in billions,” he said.

The Minister said it was “impossible” to make long term economic predictions due to Covid-19 and Brexit, and anything beyond 2021 would be “very much crystal ball gazing.”

Labour TD Ged Nash said a hard “cliff edge” where the current wage subsidy scheme for businesses ended next March would be “catastrophic,” and some form of extension would be needed.