Over 1,000 HSE staff off work for Covid-19 related reasons 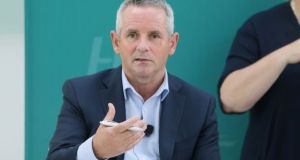 Mr Reid said he had a “strong concern” about virus trends, and pointed out that every hospitalisation of a patient has a significant impact. Photograph: Leah Farrell / Photocall Ireland

Over 1,000 Health Service Executive (HSE) staff are currently off work for Covid-19 related reasons, it has emerged.

This compares to 400 staff who were off due to testing positive or as close contacts of a case back in August, according to HSE chief executive Paul Reid.

A “significant proportion” of other staff are cocooning, he added.

Mr Reid said he had a “strong concern” about virus trends, and pointed out that every hospitalisation of a patient has a significant impact.

“I’m definitely more concerned than I was last week with the trends that I see. We’re not at the stage where we’re overwhelmed but we’re on watch.”

A total of 157 Covid-19 patients were in hospital on Wednesday night, with 27 in intensive care units (ICU), he said.

Given the rise in cases, it was “extremely tight” in relation to capacity in hospitals, and the system was “challenged, but not overwhelmed”. Some hospitals were already having to cancel or defer procedures to accommodate Covid-19 work.

The incidence of the the virus is growing in all age groups, HSE chief clinical officer Dr Colm Henry said, with a 15-fold rise in incidence in over-65s since the start of August.

Testing has been carried out in 287 schools, he added, and 122 cases were identified.

Dr Henry said it was hoped to reach 300 intensive care beds by the end of the year, and surge capacity could increase that number to 350, though this would involve the redeployment of staff.

Mr Reid defended the service against claims it was ill-prepared for the current surge in Covid-19 cases.

Claims the HSE didn’t use the summer to prepare for a fresh surge were “ill-informed, inaccurate and doesn’t do any justice to the relentless work” by staff, he told the weekly HSE briefing.

From May, the service had planned for the restoration of non-Covid services and the strengthening of services, he said. Dual pathways of service, for Covid and non-Covid patients, were created.

Public health staffing had been nearly doubled, mainly through the temporary redeployment of other staff, and funding has been obtained for 255 additional permanent staff.

In addition, the testing system was built up over the summer to a 100,000 a week capacity, and a “best in class” contract tracing app was developed.

Last week, 90,000 tests were carried out, Mr Reid said, with a mean end to end turnaround time of 1.9 days. The average time from referral by a GP to swabbing was 27 hours.

Four significant outbreaks in nursing homes are currently being dealt with, according to HSE chief operations officer Anne O’Connor, with 26 homes currently receiving support from the HSE.

Ms O’Connor said most homes had embraced new infection control guidelines and outbreaks were being identified and tackled more quickly than in the spring.

However, “all our hard work will be for nothing if our EDs are overwhelmed this winter”. If it came to doctors having to choose whether to treat a cancer patients or one with Covid, “then we’ve lost”.

Lifford/Stranorlar in Co Donegal remains the national “hotspot” for Covid-19, with a 14-day incidence of 602.6 cases per 100,000 people, according to new figures.

This is more than five times the national average of 116.4, the figures published on the Government’s data hub show.

Other areas outside Dublin with high levels of the virus - an incidence above 200 - include Buncrana in Co Donegal, Kilrush in Co Clare, Boyle in Co Roscommon, Carrickmacross in Co Monaghan, Galway City Central, Ennis, Cork City South-Central and Bray East in Co Wicklow.

In the capital, Ballyfermot/Drimnagh, Ongar, Dublin North Inner City and Swords also have incidences over 200.