Licence fee's replacement may be linked to local property tax 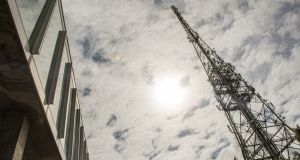 RTÉ mast at Donnybrook: Earlier in August, it was announced the Government would put the collection of the TV licence fee out to tender. Photograph: Brenda Fitzsimons

A new broadcasting charge to replace the licence fee could be linked to the local property tax (LPT), according to documents on how to fund public service broadcasting considered by the Cabinet.

A report from a working group on the future funding of public service broadcasting is expected to be published shortly, but some of its suggestions have already been considered by Ministers.

Cabinet documents show the terms of reference for the group included the prospect that the Revenue Commissioners be used to collect the television licence.

Another was that the current licence be replaced by a new “device-independent charge” to cater for “changes in technology and consumer trends”.

Earlier in August, Minister for Communications Richard Bruton announced the Government had decided to put the collection of the TV licence fee out to tender, raising the possibility that An Post could lose the lucrative business.

This is one of the recommendations of the working group and the successful bidder will be awarded a five-year contract for the service.

Once this five-year period has elapsed, the licence fee will be replaced by the “device-independent broadcasting charge”, which is designed to capture households consuming publicly funded content on devices other than traditional television sets. This is another of the group’s recommendations.

The full report from the working group has yet to be published, although the Department of Communications says it will publish it soon.

A memorandum for a Cabinet meeting last month, before Mr Bruton made his announcements, referenced other aspects of the report’s findings.

It says the terms of reference for the working group were informed by a previous report from the Oireachtas Communications Committee, which recommended that “Revenue should be appointed as collection agent for TV licence collection and that a non-device-dependent, household-based, public service broadcasting charge be subsequently introduced”.

“The report recognises that there is no ideal collection mechanism or perfect solution to hand,” the Cabinet memo states. “A device-independent charge needs to be introduced to cater for the changes in technology and consumer trends.

“However, there is a range of complex challenges that will need to be addressed in order to implement this approach. If a broadcasting charge were to be collected with local property tax, for example, there would be a significant issue in that the TV licence has traditionally been the liability of the property occupier while the LPT is focused on property owners.

“The LPT also does not cover commercial properties so an additional collection mechanism would need to be set up to address this area.

“In addition, there would be a requirement for a strong information and communications campaign in order to gain public acceptability.”

The issue of using property tax for the collection of a new device-independent charge is also referenced in observations to Mr Bruton’s memo.

Observations allow other Ministers, as well as the Attorney General and interested State bodies, in this instance the Data Protection Commissioner, give their views on policy proposals.

Notes from Attorney General Seamus Woulfe’s office say “there are some policy ideas and concepts discussed in the memo and in the attached reports (for example, analysis of the use of the local property tax legislation to collect a broadcasting charge) that would require careful analysis and legal advice were they to be progressed”.