Halligan to seek an additional €4m for school bus scheme 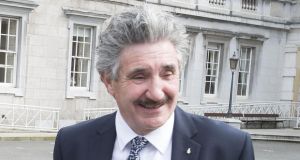 Minister of State for Training and Skills John Halligan: ‘The crux of the problem is that if there were spaces on a bus, rather than let it go to its destination with seats empty, we then put children that were not eligible.’ Photograph: Dave Meehan

Minister of State for Training and Skills John Halligan has vowed to continue to fight for an extra €4 million for the school bus scheme to continue to include concessionary children.

Concessionary children are pupils who get a seat on a bus even if they are not eligible, because there is a vacant space.

Parents have mounted a campaign to get the Department of Education to change the rules when it emerged 18 children from one school were told they could no longer use the school bus because of lack of space.

Previously, students who were attending their second closest school were allocated transport on the basis of random selection, however it emerged some had not been provided with any school buses for the year 2019/2020.

Speaking on Monday evening, Mr Halligan said: “We’re in negotiations ” with Minister for Public Expenditure Paschal Donohoe and his department about the matter . He said “in fairness” to Mr Donohoe he had to think of Brexit and “where we will be in a very tight fiscal space”.

“This department awaits a business case for the proposal, including a robust cost analysis, as year-to-date trends indicate there is already a strong likelihood of a considerable overspend in this area for 2019,” she added.

Mr Halligan said: “The crux of the problem is that if there were spaces on a bus, rather than let it go to its destination with seats empty, we then put children that were not eligible – that’s concessionary children, on the bus” .

“That started at 300 – that’s up now to 30,000 concessionary children - that is where we have a problem, the scheme was put in place for eligible and special needs children.”

Mr Halligan, who was speaking on RTÉ radio’s Today with Miriam O’Callaghan, added that in 2018 the cost of providing school transport amounted to €206 million with “a very small proportion” paid by parents, and the rest by the department.

“The problem is the service dates from 1968. The system is one of the best in Europe. All eligible children get school transport either through the rural grant or on buses or taxis, all special needs children get it.

“Our problem at present is that every year more and more concessionary children come into the scheme.

“What I’m saying now is we do require about €4.2 million which would take all concessionaries off the scheme. I am looking for it. My view is that we should get it. If I had my way all children, eligible or otherwise, should get school transport.

“We are still in negotiations and we’ve made our case on a number of occasions. I think we do have a chance of getting some.

“I believe that €4 million would resolve a lot issues in more problematic areas where concessionary children are not getting transport.”

Mr Halligan said he believed €1.6 million will be made available through the Department for Education. “ That will deal with some of the hotspots but it won’t bring all concessionaries into the scheme. That requires more money.”

It emerged on Sunday that Minister for Education Joe McHugh has provided some additional funding to alleviate issues around the provision of school buses.

A spokesman confirmed that the minister has since issued an instruction to officials to spend additional funds in an attempt to alleviate problems for secondary students in the worst affected areas.

A letter, sent by Mr McHugh to assistant general secretary Ned Costello, stated that every eligible student, who met the requisite distance criteria, and paid on time, must have a service for the beginning of the school year on August 28th.

“The Minister has made his views on this annual problem well known,” the spokesman said. “If the 2011 review of school transport was implemented in full, then about 30,000 youngsters face being kicked off buses.” – Additional reporting PA