Ringsend residents warned of ‘intermittent odours’ as work carried out 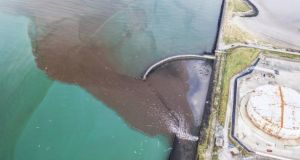 Local residents in Ringsend can expect “intermittent odours” over the coming five days while essential maintenance works are carried out at the city’s wastewater treatment plant, according to Irish Water. Photograph: Eoin O’Shaughnessy/ DublinCityShots

Local residents in Ringsend can expect “intermittent odours” over the coming five days while essential maintenance works are carried out at the city’s wastewater treatment plant, according to Irish Water.

The maintenance on odour control units, which starts on Monday and is expected to take about five days to complete, involves replacing carbon odour control media to reduce the risk of any future bad smells coming from the Ringsend plant.

Irish Water has released a statement apologising in advance for any odours that may arise while the work is being carried out.

The Ringsend maintenance work follows an overflow at the city’s treatment plant earlier this month which led to a swimming ban across south Dublin beaches including Seapoint, Sandycove, the Forty Foot, Killiney and Whiterock. It was the fourth time this year Dublin’s main beaches were shut to swimmers because of a wastewater overflow. The ban was lifted last week after test results were carried out on water quality in the affected areas.

A seasonal ban on swimming on Sandymount and Merrion beaches remains in place due to ongoing issues around bacterial levels in the water.

According to Irish Water the pollution problem, which has at times led to almost all of central and south Dublin’s bathing spots being closed, is because of the system’s inability to cope with a growing population.

Most of the closures this year have occurred during the summer season, a further irritation to those who regularly use the sea, particularly at bathing areas along the south coast.

Overflows occur due to sudden and rapid rainy spells during which large amounts of water falls in a short period of time.

This “storm water” mixes with the network’s “wastewater” and runs into overflow tanks. However, when these tanks reach capacity their contents are vented into the sea at Poolbeg.

Testing of water quality is then undertaken, usually for a couple of days, during which time precautionary steps are taken in keeping people out of the sea.